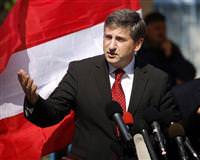 In an interview with Austrian radio broadcast on Tuesday during a visit by Turkish President Abdullah Gul, Spindelegger said EU membership negotiations with Turkey would take years and
serve to "Europeanise" the country.

"We will wait and see what happens, be contructive, but remain true to our basic position that we will strive for a special partnership with Turkey," he said.

Vienna's official line is that the outcome of Turkish entry talks is open. Austrian voters would get the final say in a referendum if enough members of parliament seek one, as resurgent far-right parties demand.

Ankara has already rejected the notion of a special partnership falling short of membership.

But the division of the Mediterranean island of Cyprus and reservations by heavyweights Germany and France about granting Muslim Turkey full membership are major obstacles.

Gul had called on Monday for a factual discussion of open points in the talks, criticised restrictions on EU visas, and urged the roughly 200,000 Turks in Austria -- half of them Astrian nationals -- to master German as well as Turkish.

In a radio interview aired on Tuesday Gul suggested booming bilateral business ties may suffer if Turkey continues to get the cold shoulder.

"One should ask whether Austrian companies will continue to be able to make the profits they make now in Turkey if they don't cooperate with Turkey," he said.

He also addressed criticism of Turkey's record on guaranteeing freedom of speech by saying: "In Turkey no journalist will be punished for his journalistic activity. No one will be sanctioned for his opinion."