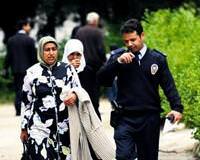 Intel has surfaced the PKK is trying to create a significant flow of refugees coming into Turkey from Syria prior to the upcoming parliamentary election. In order to prevent PKK infiltration, fingerprints from 10,000 PKK terrorists and global information technology has been sent to the borders.

While Turkey is busy developing a number of multifaceted plans for Syria in light of recent developments, they are also paying special attention to the presence and ill intentions of the PKK terrorist organization. Information has surfaced that the PKK is attempting to establish a significant flow of refugees to come in from Syria prior to the June 12th elections. According to intelligence reports, the PKK terrorist organization has reached an agreement with opposing Syrian Kurdish groups to conduct a strategy to establish a significant flow of refugees to come into Turkey from Syria. Measures to prevent PKK members from entering the country as refugees are currently being put in place. The fingerprints and records of 10,000 PKK members as well as global information technology have been sent to security forces along the border, while additional personnel have been assigned to border regions.

The PKK presence is especially robust in areas situated nearby the Hatay and Kilis border. The PKK has intentions of creating chaos, and intends to instigate a significant migration of refugees into Turkey.