A telephone call that wakes the state’s leaders 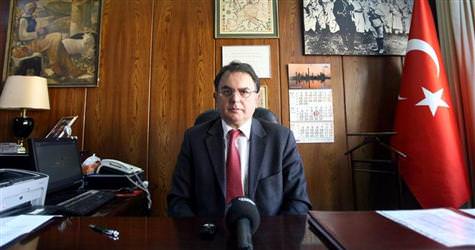 When danger began to escalate in Libya, the night before last Davutoğlu paid a telephone call to Erdoğan. Later, at 1:00 am, Davutoğlu called Gül and received permission to shut down Turkey’s embassy in Trablus.

SABAH has accessed the details surrounding the decision to shut down the Turkish embassy in Trablus:
When Gaddafi supporters began attacking diplomatic representatives, Davutoğlu first briefed Erdoğan and then woke Gül to relay the urgency of the situation. When Gül approved the evacuation, the twelve embassy staff embarked on a journey to Tunisia.
The decision to evacuate embassy personnel was made on May 1st, the same day that Gaddafi's son and grand children were killed. It was also the same day the French, Italian and English embassies were looted. Davutoğlu first called the premier and then later the president. Forced to wake Gül up at one am, Davutoğlu requested his orders to announce the decision to evacuate Ambassador Levent Şahinkaya and those working aside him after they requested to be brought back home.
TWO POLICE FOR EVERY DIPLOMAT
A while back, the Trablus Embassy had been emptied when Turkish nationals were being evacuated, with all embassy wives and children returned to Turkey. Most recently, at the beginning of April, 17 more personnel returned to Turkey, leaving four diplomats and eight special operatives. Despite the embassy being located in close proximity to their residences, the twelve embassy members were unable to leave the building. When they entered the garden, they spent their time collecting empty shells. They had the opportunity to eat vegetables once a month ago and the dried goods, such as rice, bulgur, pasta and beans that was brought in by C-130 planes was about to run out.
They were making their own food and eating out of a caravan. The local personnel were no longer coming to work for fear of their safety. When news surfaced of the May 1st killing of Gaddafi's son, the decision which had been long postponed was expedited by Foreign Affairs Minister Davutoğlu. Despite it being midnight, Davutoğlu first called Prime Minister Erdoğan and received his approval. Later, he made a phone call to President Gül, as the embassy is a representative of the Presidency. At this point it was approximately one in the morning. Gül was sleeping; however he was then woken and briefed on the urgency of the situation. The President issued a verbal order which came as good news to the 12 embassy staff hoping to be evacuated. However, Davutoğlu's orders were clear, they were not going to leave as if they were running, and instead were going to leave bearing the Turkish flag.
HE LEFT WAVING THE FLAG
Ambassador Şahinkaya put the Turkish flag up on his car and accompanied by two other vehicles from the embassy he headed on his way. At 08:00 am he started up the engine and began the 200 km road from Trablus. The convoy, which did not stop en route, witnessed the evidence of war surrounding them.
'GADDAFI MUST LET GO'
Meanwhile, Prime Minister Erdoğan has made another historical appeal to Libyan leader Gaddafi: "There no words left in regards to the Libya issue. Gaddafi needs to immediately step down from power. It is now time for Gaddafi to do this for the future of Libya."