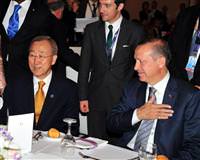 Investment in the world's poorest nations will aid global recovery, U.N. Secretary-General Ban Ki-moon said at a conference in Istanbul on Monday to agree a 10-year action plan to help least developed nations.

"I have come to this conference with a single simple message -- the LDCs will be the most important wave of the development," Ban told a news conference after the opening session of the U.N.'s once-a-decade conference.

"Let me emphasise again I am not arguing for charity but for investment," Ban said. "Returns can be profound for the LDCs and for the global economy. Success for LDCs is success for all."

Ban drew a bleak picture of progress made so far, with the number of countries on the U.N. list of LDCs almost doubling to 48 since lists were first made in the 1970s.

The list includes 33 African countries, 14 Asian and Haiti -- the only Western Hemisphere country. Their populations total 885 million, and 75 percent of them live on less than $2 a day.

Criteria for the U.N. list include having a per capita national income of less than $905 per year, high child mortaliy, poor access to education, and vulnerability to food and economic insecurity -- in focus after months of revolt in the Arab world.

"The wide gap between the countries is more visible today to people across the world," Gül said.

"It's also a big ethical and moral mistake, to have such a wide gap, and therefore unsustainable for political and security reasons," said Gül, whose own country provides $2 billion in aid to poor nations through official and non-government channels.

Addressing non-goverment organisations on Sunday, Ban cited some positives since the last conference in Brussels in 2001.

He said that in many LDCs more children were attending school, gender equality had improved, more women were earning and their representation in government had risen.

"Furthermore democratic elections are now the norm in the LDCs rather than the exception," Ban said.