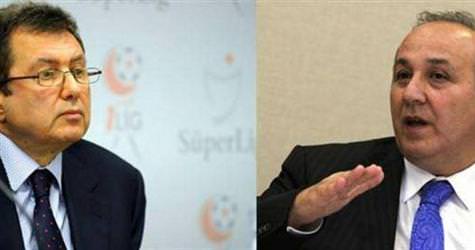 When the ‘Crazy Mehmets’ refused to pay the capital for the Başkent Gaz natural gas tender, the security payments went straight to the treasury and registered as revenue.

Mehmet Emin Karamehmet and Mehmet Kazancı were the highest bidders of the tender for the privatization of 80 percent of the state-run Doğalgaz Dağitim A.S. for 211 million dollars, however when they failed to pay up within the timeframe allotted, the tender win was cancelled.
A FEUD BUT NO FUNDS
Known as the 'Crazy Mehmets' for their record breaking tender bids, when a feud erupted regarding administrating the company they were founding, they were unable to acquire bank credit. As a result, they were unable to deposit the 1.2 billion dollars needed for the acquisition of Başkent Gaz. When the money didn't come through within the time allotted, the 107.6 million dollars offered as a down payment went straight to the treasury.
35 MILLION DOLLARS MORE
It remains unclear as to how the duo, who also won both the Bosphorus and Ayedaş electricity grid tenders, will be able to surpass their financial difficulties. If they are unable to come up with the money for the electricity distribution tenders, an additional 35 million dollars in down payments offered will also go up in the air.
Turkey's Privatization Administration said on Tuesday it had cancelled Ankara's gas network sale and plans to hold another tender as soon as possible to sell the government's stake in the gas network.
The Privatization Administration made the announcement in an e-mailed statement, saying the MMEKA consortium, which had placed the top bid in an auction, couldn't fulfill its obligations.
MMEKA, a venture between businessmen Mehmet Kazancı and Mehmet Emin Karamehmet, last August offered a top bid of $1.21 billion for the central government's 80 percent share in the Başkent natural gas network in the capital Ankara. The partners ended up going to court over a dispute regarding management of the company they were going to set up. After negotiations that went in to the late hours the night before last, the banks decided against offering credit to a company that is embedded in a partnership and administration crisis.
A payment deadline was due last week and extended until Monday May 9.
Deeming the second highest bid, which came from Fernas, to be lower than that of the estimated value of the tender, the Privatization Administration did not provide the name of a secondary company to the High Board of Privatization resulting in the cancellation of the said tender.
According to Privatization Administration Deputy Chairman Ahmet Aksu, the new tender for Başkent Gaz will be held at the end of this summer or in the fall.