Two new cities to protect against an earthquake 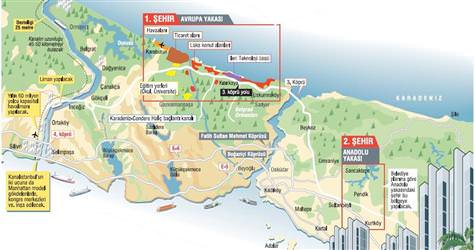 Prime Minister Erdoğan has announced another mega project for Istanbul: creating two cities for the metropolis. Districts most threatened by a potential earthquake will then be moved to the newly established areas.

FOR TURKEY AND FOR ISTANBUL
After recently announcing plans for the Kanalistanbul project, Prime Minister Erdoğan yesterday introduced his second big project, entitled 'Two New Projects for Turkey and Istanbul'. "One year after the election, we will begin building two new, one million resident capacities each, cities in Istanbul.
MINING REGIONS
"One city will be built on the European side along the Black Sea shore and the other will be located on the Anatolian side. The third Bosphorus Bridge will be routed through these areas. On the European side, the city will be erected in a mining area that is no longer in operation.
IT WILL NOT BE FORCED
"Residents of earthquake prone districts will be relocated to these two cities situated far from the fault line on a voluntary basis. We will be conducting a tender for the third bridge and we will also build a 60 million passenger capacity airport."
Prime Minister Recep Tayyip Erdoğan announced the 'Two City' for Istanbul project in the Haliç Congress Center yesterday. The cities are planned to accommodate 1-1.5 million people each. One will be situated on the Anatolian side of the metropolis, with the other located along the Black Sea, in a quarrying location. Erdoğan explained the project's objective by stating, "This is to save Istanbul from a structuring which could result in the deaths of maybe hundreds of thousands of people should there be an earthquake."

Prime Minister Erdoğan went on to relay the following messages:

"WE WILL SAVE ISTANBUL"
* "We, as a nation, are members of a very grand civilization which has erected one of the world's most famous cities. Istanbul, which has come from the depths of history, has in the past few hundreds of years suffered significant destruction.
* We will begin constructing the two new cities for Istanbul right after the parliamentary elections. What we have done up until now is not conclusive project planning. This is a project plan based on a hundred thousand plans.
* We are building these two cities for urbanization and for change. Our governor, our metropolitan mayor, our district governor and district mayors will be assisting us. We will be consulting our citizens. We want to save our public from unsightly structuring and inhumane locations such as roads that are so narrow a vehicle isn't even able to enter in the case of a fire. We want to save our Istanbul from its own infrastructure which could result in tens of thousands or even hundreds of thousands of people dying from an earthquake.

THE MOST EARTHQUAKE RESISTANT REGION...
* At present, the Black Sea shore is the region least under threat in the case of an earthquake. It is for this reason that we are taking a step to develop this region. Within the framework of our Kanal İstanbul project, we will already also be developing to a certain degree in its vicinity. We will also be relocating people there. Ideally, according to our estimations there will be one million people residing on one side and one million on the other. Both cities will become desirable locations worldwide, just like Istanbul with commercial centers, wide avenues, sports and cultural centers.
* First and foremost, these two cities will reinforce Istanbul's earthquake preparation. Taking into consideration the potential loss of a hundred billion liras in an earthquake in Istanbul, the cost of building two cities will not bring on any extra burden to our country."