'It should be a smooth transition' 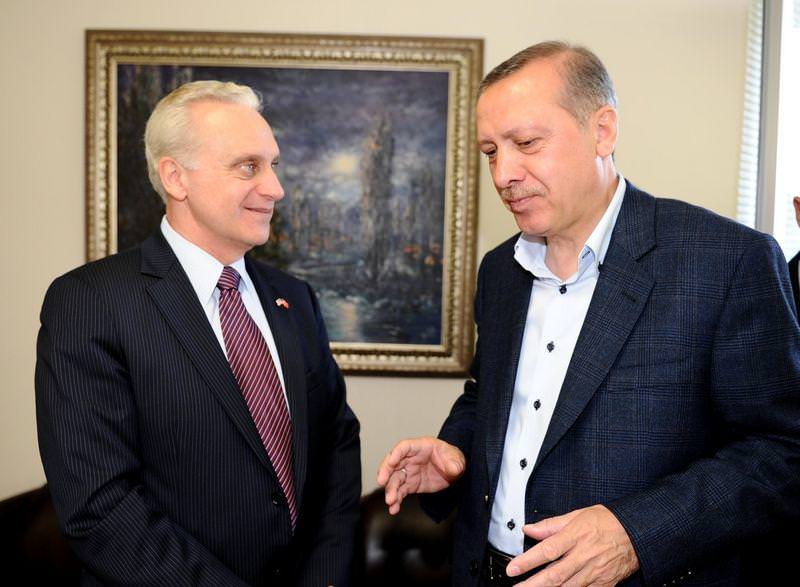 Ambassador Ricciardone hand delivered a message from U.S. President Obama in a meeting granted by Erdoğan on a helicopter landing field. In regards to the situation in Syria, Erdoğan stated that the transition should be smooth and not rushed.

United States Ambassador Francis J. Ricciardone delivered Prime Minister Tayyip Erdoğan a message from U.S. President Barack Obama. The meeting which transpired before tomorrow's address by President Obama on the Middle East and the regional transitions dealt primarily with the present situation in Syria and developments in the region. Ricciardone expressed that Syrian State Leader Bashar Assad was acting extremely slow in conducting reforms, and stated, "We must use a mutual language with Assad and we must synchronize our messages." Prime Minister Erdoğan responded by stating, "The region is already undergoing a significant transformation. We shouldn't disrupt the balance in the region any further. Let's not rush and let's ensure there is an orderly transition."
In an announcement following the meeting, Ricciardone stated that Turkey is a very important ally for the United States and expressed that they want to understand Turkey's perspective. Ricciardone said, "Turkey's and especially the Prime Minister's initiatives in the region have always been extremely important for us and we are following them in extreme detail."

A NO-TRANSLATOR MEETING
The meeting, which was held without a translator, lasted 50 minutes. Ricciardone relayed Obama's significant apprehension regarding the civilian deaths in Syria, and the fact that the U.S. public is also closely following developments. Mentioning that in Syria the assembly has gone into recess prior to realizing reforms, the ambassador states, "Obama wants Syria's cooperation with Iran and Hezbollah to swiftly be brought to an end."
ERDOĞAN: DON'T RUSH
Erdoğan also mentioned his concern regarding the spreading of ethnic conflict in the region. Stating that he has relayed messages to Assad with the National Intelligence Agency, or MİT, Undersecretary Hakan Fidan as well as the Minister of Foreign Affairs Ahmet Davutoğlu, Erdoğan went on to state, "Do not rush a transition in Syria, it should be a smooth transition."
MEETING AT A HELIPORT
Prime Minister Erdoğan offered to meet Ambassador Ricciardone at the Yenimahalle heliport due to the ongoing campaign traffic for the upcoming parliamentary elections.