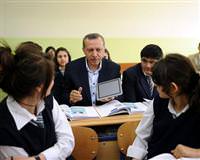 Turkish Prime Minister Tayyip Erdoğan’s AK Party is on course to easily win a third consecutive term in a parliamentary election on June 12, according to an opinion poll published on Wednesday.

The survey conducted on May 5-12 by polling company IKSara, showed the AK Party winning 45.5 percent of the vote, below the 46.6 percent it scored in the last general elections in 2007.
The findings are in line with several previous opinion polls, which have shown Erdoğan's business-friendly AK Party benefiting from strong economic growth and political stability.
The opposition Republican People's Party (CHP), which has struggled to mount a credible challenge to Erdoğan's socially conservative party, has 30.5 percent of the vote.
The poll of 2,504 voters in all 81 provinces showed support for the rightist Nationalist Movement Party (MHP) was 13.1 percent. The poll had a margin of error 0.2 percent.
A previous poll commissioned by Aksam and published on March 10 had shown the AK Party with a 48 percent backing, while the CHP had 28 percent and the MHP 15 percent.
In power since 2002, the AK Party has overseen a period of unprecedented prosperity since inheriting a struggling economy after a financial crisis in 2000-2001.
Erdoğan has promised to overhaul Turkey's constitution, written in the 1980s under military tutelage after a coup, if his party wins a strong mandate in the June 12 vote.
Critics remain suspicious about the Islamist roots of AK leaders, including Erdoğan, although the party has cast itself to conform with Turkey's secular constitution and is sometimes compared with Europe's Christian Democrat parties.