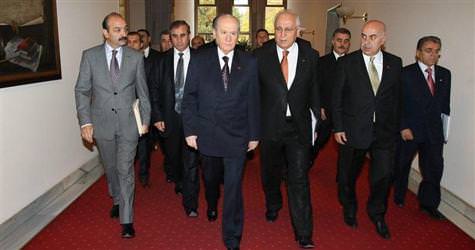 It was the second wave of resignations from the party ahead of the June 12 election, in which the MHP's prospects of exceeding the 10 percent threshold needed to retain their place in parliament were unclear.
Prime Minister Tayyip Erdoğan's ruling AK Party is expected to secure a third consecutive victory in the election, with opinion polls putting its level of support at around 45 percent.
The MHP resignations were triggered by the broadcast on a website of secretly filmed videos which showed senior members of the party in romantic trysts and making politically compromising statements.
The website, named "Different Idealists", had threatened to broadcast further compromising video recordings if party leader Devlet Bahçeli did not resign by a deadline of May 18. He has not resigned
It was not clear who was behind the website.
State-run Anatolian news agency said Deputy Chairmen Dr. Osman Çakır, Ümit Şafak, Deniz Bölükbaşı and Mehmet Ekici, along with General Secretary Cihan Paçacı and his deputy Mehmet Taytak resigned their party membership and candidacies to be members of parliament.