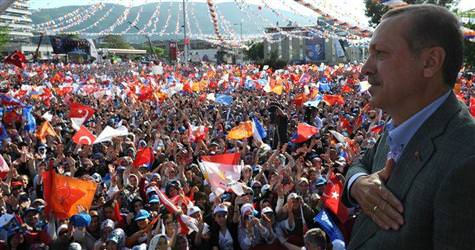 "The AK Party is not a scapegoat," states Erdoğan, inferring that after the CHP debacle, MHP is now trying to redesign itself through using controversial tape recordings of party members. "The MHP Chairman needs to open his eyes to see the game being played.”

Prime Minister Recep Tayyip Erdoğan addressed the public during the 10th Annual AK Party Youth Festivities in Gebze and at a rally in Bursa over the weekend. During his speech, the premier targeted both the Nationalist Movement Party, or MHP, Chairman Devlet Bahçeli and the People's Republic Party Chairman or CHP, Kemal Kılıçdaroğlu.
Stating that CHP also used a video scandal to reshape the party, and now MHP appears to be doing the same, Erdoğan said, "I recommend both MHP and CHP to turn away from their alliances and fraternizing established with 'gangs'. The Chairman of MHP should open his eyes and see the game that is being played. "
PM Erdoğan proceeded to deliver the following messages:
A NEW DESIGN FOR MHP
"The AK Party will not be anyone's scapegoat. And is certainly not a party that would exploit videotapes nor manufacture footage in order to denigrate other parties' chairmen.
CHP also experienced a videotape incident. Their former chairman resigned. In his place came a video manufactured chairman. Afterwards they reshaped CHP. They went ahead and called it the new CHP. This is not just a video manufactured CHP, but it is also a CHP designed by political engineers. They are now doing the same thing to MHP. I perceive this to be very distasteful and very dangerous.
Of course plitics must be decontaminated from the smut, smears and immorality. However, my public will do this at the poll booths. Those who are placing blame on us for these immoral video conspiracies are seriously deluded. The fact that CHP's chairman, who is a product of a video debacle comes out and villifies the AK Party, is evidence he is trying to cover up his own inappropriate position.
It was Kemal Kılıçdaroğlu himself that made the victim of the videos a deputy once again, while excluding the female victim off the list. It was also Kemal Kılıçdaroğlu who bargained with a female journalist he invited into his office in order to blackmail the party's former chairman. Therefore the last person that should be blaming others for the videos which have surfaced is Kemal Kılıçdaroğlu.
I recommend that the chairmen of CHP and MHP, who collaborate with criminal organizations while their eyes remained closed to reality, take a look at their own surroundings before hurling accusations at us. I recommend both CHP and MHP turn away from the collaborations they have established with gangs.
The chairman of MHP, who appears unable to contain his fury and has lost all composure as he places blame on the AKParty, needs to instead open his eyes and see the game that is being played.
Mr. Bahçeli, by crossing the lines and attacking this country's Prime Minister, you may be appeasing criminal organizations however my public is very uncomfortable with this language. Your explosions of rage, is not enough to cover up the atrocity. Your insults and profanities and uncontrolled aggression do not legitimize anything.
This picture is the most significant form of disrespect shown to our brothers who have set their hearts on MHP and I want them to see the surgery that is currently being done on their party.
Of course, intelligence units, and the judiciairy will be following up on these distasteful conspiracies. However, I request parties higher administrative members, and especially the chairman of MHP, to offer support to our struggle against criminal organizations.
It is obvious that CHP will not be fullfilling this resposibility. However, while the road is still near, MHP should support this country's pursuit for democracy.
To all of our brothers that have set their sights on CHP, MHP and BDP, they should also come through this door. This door is open to everyone."