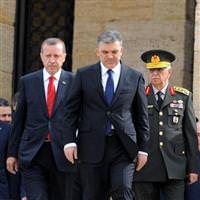 In an interview a day after U.S. President Barack Obama delivered a speech on the Middle East, Gul also hailed Obama's reference to creating a Palestinian state based on Israel's pre-1967 borders as "a very important step."

Turkey has regarded Hamas as a key factor in the Middle East peace process since it won Palestinian elections in 2006.

Gul said President Obama "has a point" when he said in his speech that Israel could not be expected to negotiate with a body that does not recognize Israel's right to exist.

Asked if he was willing to press Hamas on that issue, Gul said, "I already advised them."

In a meeting with Hamas leader Khaled Meshaal in Ankara in 2006, Gul said he told Meshaal, "you have to be rational" about recognizing Israel's right to exist.

Gul said he believed Hamas was ready to recognize Israel in its pre-1967 borders but wants that to happen simultaneously with Israel's recognition of a Palestinian state.

Ankara's ties with former close ally Israel broke down over its military operation in the Gaza strip in 2008 and hostility was fueled by a Israeli commando raid on aid flotilla which killed nine pro-Palestinian Turkish activists in May last year.

Turkey has demanded that Israel end its blockade of the Gaza strip and its aggressive stance on the Palestinian issue has created tensions between Ankara and Washington.

The paper said Obama's speech was being interpreted by Turkish officials as a significant if nuanced change.

Gul also welcomed Obama's pledge of debt relief and aid for Egypt and Tunisia as they struggle in the wake of popular revolutions. But he said a much larger scale "Marshall Plan" for the Middle East was needed.

Such a fund should be run by the World Bank and draw on contributions from countries in the region, as well as from traditional donors in the West, Gul said.