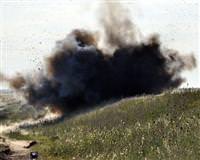 A bomb device, containing three cylinders filled with 50 kilos of TNT, C-4 and ammonium nitrate with remote activation was found under the Söğütçay Bridge located on the Nusaybin-Cizre Highway in Mardin.

Security forces found the explosive device when conducting a search after having received a tip. Police were accompanied by two trained bomb-sniffing dogs, "Ecel" and "Hasar", which found three devices ready to be exploded hidden under the bridge, situated nearby the Söğütlü village. Upon closer inspection it was determined that the device, which contained a total of 50 kg of TNT, C-4 plastic explosives and ammonium nitrate was ready to be detonated by a cable and remote control.
Security forces shut off the road to traffic and the Mardin District Gendarmerie Command bomb squad was brought onto the scene. After closer inspection, ten lorry tires were requested and placed around the device.
The bomb was then detonated by security forces. The controlled explosion resulted in 2.5 meter-deep holes in the ground. Later, authorities announced that with the controlled detonation of the explosive device, a possible disaster was prevented.