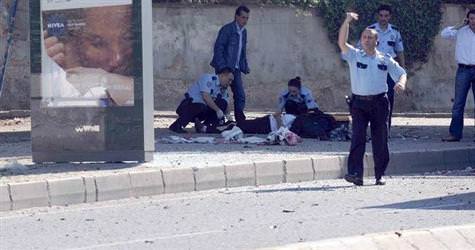 This time, terrorists, with blood on their hands, have targeted innocent people on their way to work in Istanbul. Just 100 meters away from a Police School in Etiler a time bomb placed on an electric bicycle exploded at precisely 08:58 Thursday morning. Eight were wounded in the blast, including one police officer and three women.

Ayten Bal (38), who was driving past in a car at the time of the explosion, lost her leg. Forty-one year old Yazgulu Subatli, who was on the sidewalk at the time the bomb exploded, suffered injury to her esophagus. While Istanbul Governor Mutlu called it an "attack against civilians" the Chief of the Police Department stated the target may have been the police school.
The site of the explosion yesterday morning is not only close in vicinity to a Police School and a shopping center, it is also a highly populated district in the city which contains a number of various education centers. The PKK terrorist organization is suspected to be behind the heinous attack which wounded eight, including three women and one police officer.

The type and method of the bombing, as well as the fact that it occurred just 100 meters' away from the police technology school points to the PKK.
Yesterday's explosion transpired as follows: A time bomb, planted on an electric bike exploded at 08:58 a.m. making a very loud noise. Eight people were left covered in blood on the ground. Two vehicles, a taxi and an İETT bus were also affected by the blast. Windows shattered in a number of surrounding buildings. A significant number of police, fire fighters and ambulances were dispatched to the site. Six of the wounded were taken to the Şişli Etfal Hospital, while the other two were admitted to the Okmeydanı Education and Research Hospital.
Meanwhile, police secured the area, concerned of the possibility of a second bomb being planted in the area. While police continued investigating, locals who were watching the scene from their windows were warned to go inside. Police used jammers to prevent a possible remote controlled bomb. Police found four suspicious packages in the vicinity. Once the bomb squad verified that the packages were safe, the tension began to diffuse.
The bomb, described as a handmade, medium sized and time adjusted and was brought to the location on an Impreal brand electric bicycle. According to MOBESE footage two individuals stood where the bike was a short time before the explosion. Police are now searching for those two individuals and are also to determine where the bike was purchased.
Another allegation is that one of the perpetrators who brought the electric bike to the site was then scene cutting the cables of the nearby MOBESE camera. This allegation however was not verified.