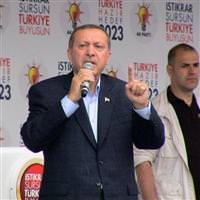 A bicycle bomb wounded eight people including a police officer in Istanbul Thursday, in an attack that Prime Minister Tayyip Erdoğan said bore the mark of the main Kurdish militant organization.

The blast occurred near a bus stop in Etiler, a residential and shopping district, at the end of the morning rush hour in Turkey's biggest city.
Turks vote in a parliamentary election on June 12. Security forces are on edge as militant activity, related to a long-running Kurdish separatist insurgency and including attacks on police, has increased in recent weeks.
There was no immediate claim of responsibility.
Erdoğan, campaigning in central Anatolia, threw suspicion on the Kurdistan Workers Party (PKK), the main militant group whose insurgency began in the 1980s and has killed more than 40,000.
"When we look at the style it appears to be related to the terror organization," Erdoğan stated, using the veiled term he often uses to refer to the PKK.
Police chief Hüseyin Çapkın said an electric bicycle with the explosive device planted on it was left close to a nearby police technical college. "... we can say it was a medium sized bomb," Çapkın told reporters at the scene.
Erdoğan's AK Party is expected to score a comfortable victory next month to win a third consecutive term in office, having first come to power in 2002.
Erdoğan has said he will rewrite Turkey's constitution if he is re-elected, to replace one drafted in 1982 under military tutelage following a coup two years earlier.
"The aim of the attack is to prevent Turkey from discussing democracy, elections, a new constitution," said Suat Kılıç, a parliamentarian from the ruling AK Party. "Terrorist organizations carry out these attacks before every election."
"The attack aims to prevent AKP from gaining enough seats to change the constitution," Kılıç said.
Eight people were injured in the blast, including one police officer and two in critical condition.
The site of the blast was cordoned off and white-suited forensic teams combed the area.
"We thought the building had collapsed. I even thought that a plane had crashed into the next garden. Everybody was in panic," pharmacist Ilhan Kurt told Reuters.
Watching from his shop across the road he saw a few people getting off a bus that had been passing by when the explosion occurred. "Some people were holding their ears, who I think were injured. Three or four people got out of a bus."