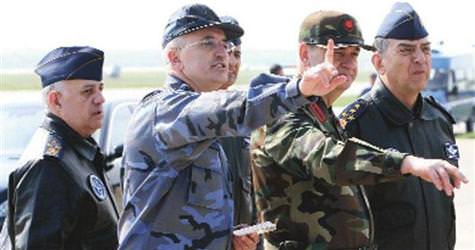 Five serving generals, two colonels and an admiral appeared in an Istanbul court on Friday for questioning over an alleged 2003 plot to unseat the government of Turkey's Prime Minister Tayyip Erdoğan.

The move by prosecutors to call such senior serving officers marked an escalation in a case that has so far led to nearly 200 serving and retired officers being charged of links to an alleged conspiracy, dubbed Balyoz "Operation Sledgehammer."
Most of the officers charged are being held in prison.
Coming a little over two weeks before Turkey votes in a parliamentary election, the latest development, according to Turkish media, has strained already tense relations between the country's secular top brass and a ruling party whose roots go back to banned Islamist movements.
Some television and newspaper reports suggested the armed forces' surprise last-minute cancellation of its largest regular exercises in the Aegean region this week was a reaction to the decision to summon the generals for questioning.
An armed forces official said they were canceled for purely military reasons, while political leaders have declined comment.
The most senior officer among those called by prosecutors to answer questions was General Bilgin Balanlı, commander of the military academies. Their questioning follows the seizure of fresh documents at a retired colonel's house.
By coincidence on Friday, Erdoğan visited the home town of Adnan Menderes, the prime minister who was ousted in a military coup on May 27, 1960 and was subsequently executed.
The military has overthrown three elected governments since 1960, and forced a coalition led by an Islamist party to quit in 1997, in an event that led to Erdoğan and other leaders of banned religious parties to form the AK Party.
Opinion polls show Erdoğan's AK set to win a third consecutive term of single party rule when Turkey votes on June 12, having first swept to power in 2002.
Credited with overseeing a period of unprecedented prosperity, Erdoğan aims to introduce a new constitution, to replace one drafted under military tutelage following a coup in 1980. His critics fear the new charter will be in the mold of the AK, though Erdoğan says it should strengthen democracy.
Most of the defendants in the Sledgehammer case, which broke wide open more than a year ago, are currently being detained at Silivri jail, just over an hour's drive outside Istanbul.
The most senior among them is retired General Çetin Doğan, former head of the prestigious First Army, who along with several other officers and journalists caught up in other conspiracy probes, is campaigning to win a seat in parliament.
Defendants in the Sledgehammer case say the documents presented by the prosecution were part of a war game scenario used in a military seminar and that other documents were faked.