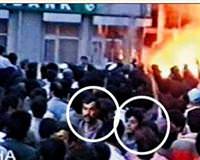 The file detailing the events that transpired at Madımak, in which 37 people were burned to death. Four PKK members were found to have connections to the incident; however none of them are still alive.

The Erzurum Special Authority Chief Public Prosecutors' Office, which has been handling an extremely confidential investigation into the Madımak Massacre, in which 37 people were burned to death, has uncovered a very important clue into the case. A testimony by a confidential witness in 2009 provided links to the PKK terrorist organization resulting in the Sivas Police Department reopening the file for the Madımak Massacre. For approximately two years' now the Chief Public Prosecutor's Office has been conducting a confidential investigation in which links led to four perpetrators. In the investigation, it was determined that the four suspects were PKK members, none of which are still alive today.

The event which transpired in Sivas' Madımak Hotel took place on July 2nd, 1993. On May 20th, 2009 an individual released very important information to the Sivas Police Department regarding the incident. The Special Authority Erzurum Chief Public Prosecutors Office proceeded to reopen the 18-year-old case. An investigation was reopened under the order that all official documents regarding the massacre as well as all footage be thoroughly reinvestigated. Upon the order, police and gendarmerie officers applied to obtain background details on over 400 individuals from 21 different provinces. During the process of identifying and taking statements, a number of individuals provided 'confidential testimonies.'
The extremely comprehensive investigation which ensued for months also included closer inspection of all video footage and photographs from the vicinity.
All intelligence reports were reread. All newspaper publications from 1993 and on were put under the looking glass. All evidence was subjected to further inspection. During this time, the Special Authority Chief Public Prosecutor's Office came across extremely confidential information, which had been kept in the dark for 18 years. It is this information that points the finger at the PKK. The technical team which was inspecting the footage pinpointed four PKK members systematically spread out amongst the crowd which had gathered in front of the Madımak Hotel as it burned.
The four suspects' actions were found suspicious, and after two years of investigating, their identities have finally been uncovered. It turns out, the four individuals; PİRAN (code name) Ahmet Aydın, KÜÇÜK MÜSLÜM (code name) Erdal Yıldırım, CUDİ (code name) Sinan Kaya and MED (codename) Müslüm Şanlı, were members of the PKK terrorist organization which was active in Sivas' rural region. The Chief Public Prosecutor has confirmed the suspects' identities and has accessed their families, only to find out that the four individuals have since passed.
Nevertheless, the Special Authority Public Prosecution has investigated the four suspects; communication at the time, determining that they were in connection with a very high level PKK member. The high-level PKK leader is alleged to have conducted a series of attacks directed at both Alevis and Sunnis. The Special Authority Erzurum Chief Public Prosecutor's Office also investigated the İşçi (Labour) Party's activities in the region and once again the four suspects were tracked to have connections.
NEGLECT IS ALSO IN THE INVESTIGATION
Allegations that the state authorities at the time did not do enough in response to the Madımak Massacre has also been included in the investigation.