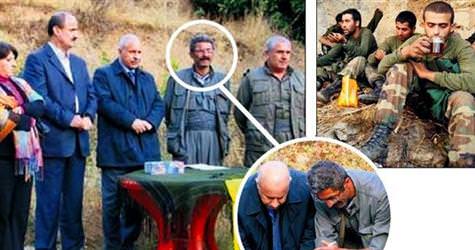 The PKK’s regional leader Yücel Halis, who was responsible for the Dağlıca massacre, which resulted in the deaths of twelve soldiers, turns out to have also been the commander of the four PKK members found to be in connection to the Madımak Massacre.

An investigation has revealed that the four PKK members found to have been connected to the massacre which transpired in Sivas in which 37 people burned to death in the Madımak Hotel, were in fact acting under the PKK's Sivas wing leader at the time, Yücel Halis.
Halis, who was responsible for a number of bloody attacks, first surfaced in the 2007 Dağlıca attack. Confidential witnesses state the following regarding Halis: He conducted the 1994 Selimiye village massacre by direct order of Öcalan. Prior to the Madımak massacre, Halis had used all of his connections in Sivas to ensure that Aziz Nesin attended the event. Yücel Halis was also responsible for handing eight soldiers over to the DTP.
A lot has been written on the July 2nd Madımak Massacre, and 91 people have been questioned in connection to the event. However, there has always remained a question mark regarding who the true perpetrators of that fateless day were. It appears that the uncovering of information by the Special Authority Erzurum Chief Public Prosecutor's Office of four PKK members present during the burning is gaining increasing significance.

DAĞLICA'S PERPETRATOR.
Yücel Halis was SHP deputy and state minister Ziya Halis' nephew was known as "Koçgiri Celladı" and was responsible for the Sivas-Zara-Divriği line. Halis' first attack was staged three days before the July 2nd, 1993 Madımak Massacre, where he cut off the Erzincan-Sivas Highway. In 1997, Yücel Halis was called to Damascus by Abdullah Öcalan. After spending time in Armenia, he later went on to become a trainer at the PKK's Northern Iraq camps. In 2005, Halis' name surfaced in connection to a raid on 12 soldiers in Dağlıca. At the time, he was acting as the organization's Hakkari leader. Having organized the raid alongside Kadri Çelik, while handing over eight kidnapped soldiers to DTP deputies, it was Halis himself who signed the forms…

'If we turn the Alevi's against the government, we can bring them to our side'
A confidential witness who provided information regarding Yücel Halis states the following: "Yücel Halis is Alevi. He used to agitate the Alevis within the organization. He would conduct attacks against Sunni villages. He staged an attack on a village in the region known as Hamu Çimen. All Alevi citizens were separated and four Sunni's were killed. He would say; 'Sunni's have already sided with the state. Alevi's are also becoming close with the state. We need to turn them against the government so they will come to our side.'

Another witness who was also a PKK member states; "The 1994 raid on the Selimiye village was staged by a direct order from Abdullah Öcalan to Yücel Halis. Halis stated that the village was one of the villages responsible for the Madımak Massacre. This is a Sunni Turkish village, we need to show Alevis they are not alone, they need to be accounted for. We have to stage this attack to prove that the Alevis in the region are strong. In other words the Alevis and Sunnis in the region need to be in conflict." When they arrived to the Selimiye village, they gathered nine of the village guards together and asked one to play an instrument. As he did, he and all of those with him were all shot to death."