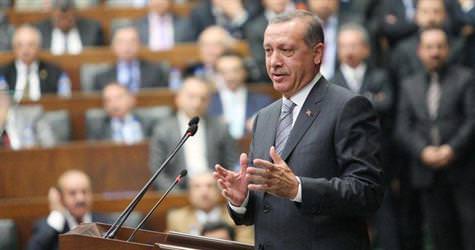 Prime Minister Tayyip Erdoğan accused opposition leaders on Wednesday of provoking clashes in Turkey before a June 12 election which his ruling AK Party is set to win comfortably.

Police clashed with anti-government protesters and detained a group of ultra-nationalists suspected of planning to stir violence at a far-right rally in the mainly Kurdish southeastern city of Diyarbakir next week.
"These are open provocations to drag the AK Party into a trap of violence," Erdoğan said in Istanbul before travelling to Diyarbakir for his own rally, vowing not to fall into the snare.
"The anger, hate-speak, provocations and insults (of opposition leaders) have unfortunately prepared the ground for such incidents."
Before Erdoğan's arrival, an unknown assailant threw a "percussion bomb" at a police control point in Diyarbakir at the rally area, security officials said. They said the device caused panic but no damage.
Opinion polls showed on Wednesday the AK was on course to win around 50 percent support in the election.
The campaign has been marked by violence at rallies, a spate of militant attacks linked to Kurdish separatists, and a sex video tape scandal that has wounded the far-right Nationalist Movement Party (MHP), the country's third largest.
MHP leader Devlet Bahçeli responded angrily to the detention of party activists, blaming Erdoğan and his government.
"An extraordinary effort is being exerted to create an atmosphere of chaos and turn the MHP and political separatists against each other," Bahçeli said in a statement.
"The prime minister and government will take prime responsibility for our fellow campaigners who have now been detained and for negative developments after this."
Police detained 18 ultra-nationalists in Istanbul and Izmir after recording alleged conversations indicating they planned to trigger clashes at an MHP rally in Diyarbakir on June 6.
TIGHT SECURITY
Police drafted in reinforcements to boost security before Erdoğan's rally in Diyarbakir, at the heart of a region witness to a 27-year separatist Kurdish insurgency in which more than 40,000 people have been killed.
Police confiscated 37 petrol bombs, commonly used by Kurdish youths in protests.
A day earlier, riot police fired water cannon and tear gas in clashes with stone-throwing protesters in the Black Sea town of Hopa, where Erdoğan was campaigning.
A bodyguard was wounded when he fell from Erdoğan's campaign bus after apparently being hit by a stone. Another man died from an apparent heart attack, media reports said.
Last week a bomb planted on an electric bicycle wounded seven people in Istanbul. And earlier in May, Kurdish militants ambushed an AK campaign bus in the northern province of Kastamonu, killing one policeman.
The MHP, which has little support in the southeast, is highly critical of government efforts to solve the Kurdish problem, which it sees as a threat to national unity.
Erdoğan launched an initiative in 2009 to grant Kurds greater cultural rights, including the establishment of a Kurdish-language television channel and teaching of Kurdish at university. Kurdish parties want political reform and autonomy.
Before his arrival in Diyarbakir, Erdoğan announced projects to build a new airport, motorways and a football stadium.
The MHP has been rocked by a scandal over secretly filmed videos apparently showing party leaders engaged in extra-marital affairs and making compromising political statements. Ten party leaders have resigned as a result.
Opinion polls suggest the scandal has not harmed support for the MHP which stands around 10 to 13 percent, above the 10 percent threshold which parties must exceed to enter parliament.