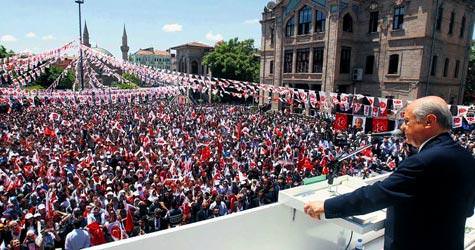 Turkish police have detained a group of ultra-nationalists on suspicion that they planned to stir violence at an election rally, media reports said on Wednesday, adding to tensions ahead of the June 12 vote.

Far-right Nationalist Movement Party (MHP) leader Devlet Bahçeli responded angrily to the detentions, lashing out at Prime Minister Tayyip Erdoğan whose ruling AK Party is set to win a comfortable third consecutive election victory.
Erdoğan said his party was targeted by "open provocations."
Opinion polls on Wednesday showed the AK on course to win around 50 percent support in the election.
The campaign has already been marked by violence at rallies, a spate of militant attacks linked to Kurdish separatists, and a sex video tape scandal that has wounded the MHP, the country's third largest party.
"An extraordinary effort is being exerted to create an atmosphere of chaos and turn the MHP and political separatists against each other," Bahçeli said in a written statement.
"The prime minister and government will take prime responsibility for our fellow campaigners who have now been detained and for negative developments after this," he said.
Police detained 18 ultra-nationalists in Istanbul and Izmir after wire-tapping alleged phone conversations indicating they planned to trigger clashes at an MHP rally in Diyarbakir on June 6.
Erdoğan was set to hold a rally on Wednesday in Diyarbakir, the biggest city in the mainly Kurdish southeast, and police reinforcements were drafted in to boost security in a region at the heart of a separatist Kurdish insurgency.
Police confiscated 37 petrol bombs, commonly used by Kurdish youths in protests, amid tight security ahead of the rally.
The MHP, which has little support in the southeast, is highly critical of government efforts to solve the Kurdish problem, which it sees as a threat to national unity.