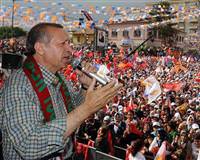 Despite all of the threats, pressure, intimidation and a bomb, citizens flocked to the Istasyon Square to watch Erdoğan rally for the upcoming election.
Erdoğan spoke out to those who came to the rally; "Don't cry Diyarbakır. We have already solved a major part of the issue, and we will solve the rest. Trust me. Go to the poll booths. Stating that the CHP is the source of the pain suffered by the Kurds, Prime Minister Erdoğan went on to state, "So who is it now that is taking account for the CHP? The BDP is, they are in solidarity."

Erdoğan delivered the following messages to the public who gathered to hear the Prime Minister speak yesterday:
"You do not stand across a prime minister of the Chairman of the AK Party, what you have standing in front of you is someone that is one of you…"
"We have all experienced the pressure exerted by the status quo in this country, we have all been oppressed."
"The patent for the Kurdish issue belongs to the CHP. It was them who made speaking in Kurdish, and releasing tapes and records in the language illegal."
"Now BDP is standing up for CHP and together with the BDP they are conducting civil fascism."
"What is the difference between the mentalities of wanting to lynch Ahmet Kaya versus not allowing Shivan Perver to perform a concert?"
"We create solutions. They want to divide us. BDP pulls strength from the PKK in trying to divide the nation." "
"Isn't it Kurds that are burning the nation, kidnapping businessmen and forcing stores to close their shutters…"
"According to them, Apo is a prophet. This is instigation and corruption. Give these BDP a lesson in the polls."
"We have something to say to those trying to turn us against one another. You are not looking for people, you are seeking out Kurds. We however are seeking out people, because for me, there is no such thing as Turkish or Kurdish nationalism. Which problem of my Kurdish brothers have they offered up solutions to, I ask you. We are producing works of art and they are producing terrorism. We have gathered under the umbrella of being citizens of the Turkish Republic. We will be one, unified, massive and strong."