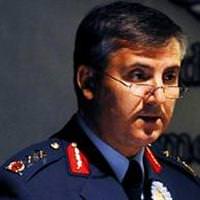 Turkey’s Air Force Academy commander was jailed early on Friday with three other officers charged with seeking to overthrow the government in a 2003 plot in which more than 200 officers are accused.

Their detention further exacerbates long-running strains between the country's once all-powerful secularist military and a religiously conservative ruling party, which some critics accuse of having a secret Islamic agenda.
Turkey will hold a parliamentary election on June 12 that is expected to earn a clear victory and a third term in office for Prime Minister Tayyip Erdoğan's AK Party.
The number one suspect in the case is retired General Çetin Dogan, former head of the prestigious First Army, who is campaigning to win a seat in parliament.
After three hours of questioning overnight, an Istanbul court ordered air force academy commander Major General Ismail Taş, two colonels and a lieutenant be sent to a military jail in the city.
Earlier this week General Bilgin Balanlı, commander of Turkey's military academies, became the highest-ranking serving officer among those charged with involvement in the alleged conspiracy, dubbed "Operation Sledgehammer" (Balyoz).
Twelve serving generals have now been arrested over the plot, which purportedly included plans to bomb historic mosques in Istanbul and trigger conflict with Greece. Defendants say the documents presented by the prosecution were part of a war game scenario used in a military seminar and that other documents were faked.
Erdoğan's government has reined in the power of the military during its nine years in power under reforms inspired by a now foundering European Union accession process.
The military staged three coups between 1960-1980 and in 1997 pressured out of office a government led by an Islamist party regarded as a forerunner of the AK Party.
The general who led the 1980 coup, Kenan Evren, will give a statement next week to prosecutors investigating the putsch and the violence which followed it. His immunity from prosecution was lifted by constitutional changes which Erdoğan pushed through last year.
Media reports have said the decision to question Balanlı was behind the surprise last-minute cancellation of major military exercises in the Aegean region last week. Armed forces officials cited purely 'military' reasons.