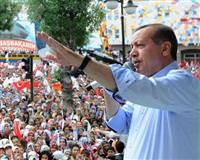 Turks vote in an election on June 12 with confidence boosted both by having one of the world's fastest growing economies, and by belief that their democracy has finally consigned military coups to the past.

Reforms undertaken by Prime Minister Tayyip Erdoğan's AK Party since it came to power in 2002 appear to have broken the cycles of financial and political crises that have punctuated Turkey's development.
The AK's success, Erdoğan's dominance and the weaknesses of the opposition mean the only uncertainty really hanging over the election result is the margin of victory.
But there are plenty of issues at stake in this complicated, overwhelmingly Muslim nation of 74 million people, clinging to its ambition of European Union membership.
If the AK, which emerged a decade ago from banned Islamist parties, wins a two-thirds majority it would make it a lot easier for Erdoğan to push through a planned new constitution.
Here is a brief run down on the main issues for the AK, the secular opposition, nationalists and the Kurdish minority;
THE ECONOMY
For Turks in work it must seem like the good times will never stop judging by the amount of money they are borrowing, and what they spend it on -- new homes, cars, foreign holidays.
Inflation is at record lows. The economy grew 8.9 percent last year, and is expected to exceed 4.5 percent this year.
Unemployment has fallen to 11 percent, low by Turkey's standards. Youth unemployment is higher at 20 percent -- not good for a country where the average age is 28 years.
However a record current account deficit is a worry. Analysts say it could reach 8 percent of GDP this year.
They also say interest rates, kept low despite runaway growth and a credit boom, will need to go up and the government should tighten up fiscally, too.
THE KURDISH PROBLEM
An insurgency has blighted Turkey's southeast since the early 1980s as ethnic Kurds -- who account for up to 15 million of Turkey's population -- turned militant to fight for rights.
More than 40,000 people have been killed and the scars run deep on both sides of the conflict.
Erdoğan took a risk in 2009 by announcing an initiative to increase Kurds' cultural rights, including the establishment of a Kurdish language television and university courses.
Since then on-off ceasefires by PKK terrorists over the past year gave some respite, but violence has picked up ahead of the election. A mass trial of Kurdish politicians accused of militant links has added to tensions.
Jailed PKK leader Abdullah Öcalan has threatened "a big war" unless the state opens talks by mid-June to end the conflict.
In the southeast, Erdoğan's AK party runs second to the pro-Kurdish Peace and Democracy Party (BDP), regarded as close to the PKK. If the BDP candidates do well in the polls, it would support the case for doing something sooner rather than later.
SECULAR STATE, MUSLIM NATION
The secular state is the legacy of soldier statesman Mustafa Kemal Ataturk, who founded the modern Turkish republic in 1923 out of the ashes of the Ottoman empire.
Erdoğan says the state will remain secular, though the roots of his AK party lie in Islamist parties that were banned.
Liberal in economic policy and conservative on social issues, the AK is sometimes cast as a Muslim version of Europe's Christian Democrat parties. Since coming to power in 2002, the AK has not passed much in the way of major legislation to suggest an Islamist agenda, but secularists pounce on every perceived encroachment to fan fears.
The AK tried and failed in 2007 to lift a ban on women wearing the Muslim headscarf entering university or getting a state job. Since then some universities have taken a more relaxed stance, and the AK is expect to try again to end a headscarf ban it regards as anti-democratic and discriminatory.
DEMOCRACY, FREEDOM AND CONSTITUTION
The AK has cast itself as a champion of democracy, having succeeded in reducing the powers of the military through reforms meant to bring Turkey closer to EU membership.
Erdoğan aims to rewrite the constitution and make a clean break with a charter written under military tutelage in 1982.
He says the new charter will bolster democracy and pluralism in Turkey. Critics fear it will be an AK version of democracy.
The opposition accuses the AK of having a secret agenda, and says it is taking control of all the centres of power, including, significantly, the judiciary.
The AK, and indeed the EU's European Commission, says reform of the judiciary, undertaken last year through constitutional amendments, was needed to strengthen democracy, as senior judges and prosecutors were seen protecting old secularist elites.
The opposition accuses the AK of cowing media critics. Dogan Yayin, Turkey's biggest media group, was hobbled by massive tax fines that drew European Commission criticism. Dogan managed to cut the fines sharply through a tax amnesty and court appeals.
The jailing of journalists in an investigation of an alleged network of secularists conspiring to topple the government in recent months also raised fears over press freedom in Turkey.
THE EU
The AK gained plenty of kudos from launching Turkey's European Union accession process in 2005. Turks enthusiasm for EU membership was a plus for the AK going into the 2007 election, but this time its almost a non-issue.
Major EU states, France and Germany, are reluctant to admit Turkey, a large Muslim nation with a substantial number of people still living in economically backward areas.
Turkey's government still makes EU membership a top priority, while noting public disenchantment. Looking at their own booming economy, many Turks now wonder what they would gain by joining a 27-nation bloc given the eurozone's debt woes.