Economist article is a last-minute boost 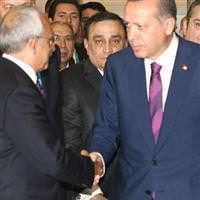 The hoopla surrounding the recent the Economist editorial which suggests votes be given to the Republican People’s Party, or CHP, has spurred the Wall Street Journal to write their own article. Claiming the Economist article instigated political furor, the WSJ qualifies the outcome by stating, “The Justice and Development Party, or the AKP secured a last-minute boost from an unlikely corner.”

Turkish leaders have lined up to condemn the Economist magazine for an editorial that urged voters to back the opposition in Sunday's election, calling it part of an anti-democratic, pro-Israeli campaign to weaken Turkey.
Opinion polls indicate Prime Minister Tayyip Erdoğan's AK Party will comfortably secure a third term.
Erdoğan himself said the article showed Israeli influence.
"The international media, because they are backed by Israel, wouldn't be happy with the continuation of the AK Party government," Erdoğan said.
Relations between Turkey and Israel, which had already gone from friendly to strained after Israel's war in the Gaza Strip, broke down completely a year ago after Israeli commandos killed nine Turks in a raid on a flotilla carrying aid for Gaza.
In an editorial entitled "One for the opposition", the avowedly pro-free-market, pro-democracy Economist, which regularly expresses a party preference in advance of elections, wrote: "The best way for Turks to promote democracy would be to vote against the ruling party." State Minister Egemen Bağış, Turkey's chief negotiator in membership talks with the EU, said the foreign press was now included in an alliance under the umbrella of "anti-democratic and mafia-like organisations".
"The Economist, in order to redeem itself, should ask for an apology from Turkish nation," Bağış wrote in a newsletter.
A leading member of Erdoğan's AK Party, which currently has a large majority in parliament, saw the article as reflecting a desire in Europe to weaken Turkey
"A growing Turkey does not suit the British or the Germans or the French. They want Turkey to be condemned to coalition governments again. That is the scenario," Anatolian reported senior AK Party official Suat Kilic as saying.
The Economist said it was not surprising voters were set to return the AK Party to power as the economy had done very well under its rule, while reforms had secured the start of EU talks and sent the politically intrusive army back to its barracks.
But it said Erdoğan's victories in struggles with the army and judiciary had eliminated many checks and balances, freeing him to "indulge his natural intolerance of criticism" and feeding his "autocratic instincts".
A vote for the opposition CHP "would both reduce the risks of unilateral changes that would make the constitution worse and give the opposition a fair chance of winning a future election",
"That would be by far the best guarantee of Turkey's democracy," it said.