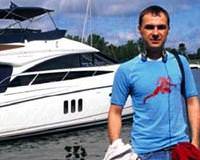 On May 28th, a number of Russian tour guides, went out on the 'Okran 5' boat in Bodrum. Aleksandr Juçkov is now the fourth person to lose his life from alcohol poisoning. Juçkov was receiving treatment at the Pamukkale University Medical Research Hospital in Denizli.
Juçkov was on dialysis due to ingesting methyl alcohol, while he was also hooked up to life support. The day before yesterday, his heart stopped a total of five times and he was brought back. However, doctors were unable to save him when his heart stopped for a sixth time. Juçkov's death was announced yesterday. After undergoing an autopsy, Juçkov's body was sent by Russian consulate officials to his native country.
HE DID NOT RESPOND TO TREATMENT
Prof. Dr. Hülya Sungurtekin explains, "We gave him one hundred percent ethyl alcohol therapy. Unfortunately he didn't respond." Also poisoned on the same trip, 28-year-old Maria Shalyapina and 20-year-old Zalya Eva Auilia died in Antalya, while 28-year-old Marina Şevelyova passed away in Russia.