Staging a war against child brides 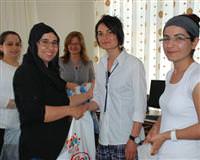 Married at the age of 13, Emine went on to change the fate of 200 other potential child brides.

Emine Kardeş, from Adıyaman, was married off as a child to someone she had never met before. She became a mother at the age of 14, and had three children by the time she was 18. After suffering from years of domestic violence, finally in 1996 she was able to walk away when her husband began a relationship with another woman. Kardeş returned to live with her parents. She was divorced by the age of 31.
ACCEPTED TO UNIVERSITY
Kardeş went on to complete her primary and high school education from home, while also raising her three children. She took lessons in handcrafts at a public educational center, where Kardeş later went on to become an embroidery teacher. She volunteered her services as a field worker for four doctors involved in maternal health. She took the University Placement Exam with her daughter and won admission to a university program, however due to financial difficulties, she was only able to register her daughter. Meanwhile, during this time, she also suffered kidney failure, and was forced to have one of her kidneys removed.
"RUN SISTER EMINE…"
Kardeş went on to begin a campaign to prevent underage girls to be married off. She set up a foundation in Kahta under her mission theme, "Girls should go to school and not become young brides," and prepared a project that she presented to the municipality. Now, with the state's support, she spends her time running to the rescue of girls asking for help because their family plans to marry them off. She has managed to change the fate of 200 girls in four different provinces.
SHE NOW OFFERS HOPE FOR CHILD BRIDES
Describing her marriage, Emine states, "Someone I have never even met before came and took me away. I thought I was going on a trip. I was a mother at the age of 14. When I think about it I get chills." In tears, Emine Kardeş states, "I don't want other girls to go through what I did." In 2009, she founded the Women and Children's Rights Foundation (Kadın ve Çocuk Hakları Derneği) and devoted herself to preventing further child brides. Once Emine's project, 'No to Forced and Early Marriage' was approved by the Ministry of the Interior, she began to travel from village to village. She provided the education funds for girls whose families wanted to marry them of and paid for other female students whose parents didn't want to send them to school. When the financial aid she received from the Ministry of Interior ran out, Kardeş proceeded to take out a 5,000 loan from the bank to ensure she could be able to continue helping others.
"I WASN'T ABLE TO SAVE MEDİNE"
Kardeş has become a symbol of hope for all child brides from Adıyaman, Şanlıurfa, Malatya and Diyarbakır with the foundation in Kahta. "People inform me. Girls who are being forced to get married, call me. They ask me for help and tell me their families aren't sending them to school, or that they are being forced to get married." Up until now, Kardeş has extended help to over 200 young girls. At times this perseverance has also caused her trouble. She has received threats and has not backed down. Kardeş also expressed grave sadness that she wasn't able to save Medine, a young girl who was buried alive last year by her father and grandfather for talking to boys. "Before the incident, someone told me that Medine was constantly beaten and never sent to school. I went to see her family a few times, however they reacted against me. I said to myself, 'I'll go again in a few days' and then this event transpired. I wasn't able to save Medine. However I continue to go village by village and to home by home in order to ensure there are no more Medines."