Erdoğan says Turkey will not close borders to Syrians 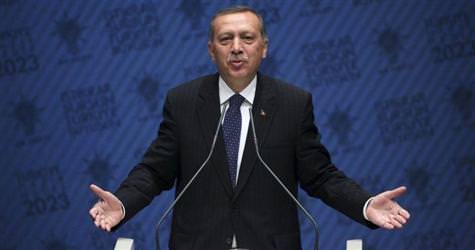 Turkey will not "close its doors" to refugees fleeing unrest in Syria, Prime Minister Tayyip Erdoğan said on Wednesday after reports of more than 120 Syrians crossing the border overnight.

Erdoğan said Ankara was monitoring developments in Syria with concern and called on Damascus to show more tolerance toward its citizens after latest clashes in northwest Syria by the border with Turkey.
Syrians have fled the town of Jisr al-Shughour fearing bloodshed as troops with tanks approached, under orders to hit back after the government accused armed bands there of killing scores of security men.
"We are monitoring developments in Syria with concern," Erdoğan told a news conference ahead of a June 12 parliamentary election which his AK Party is expected to win comfortably.
"Syria should change its attitude toward civilians and should take its attitude to a more tolerant level as soon as possible."
"It is out of the question for Turkey to close its doors to refugees coming from Syria," he added.
A total 122 Syrians, including women and children, entered Turkey overnight and were being housed in tents set up by the Red Crescent in the Yayladağı district of southern Turkey's Hatay province.
A Turkish foreign ministry official said around 420 people have crossed the border from Syria since the bloody protests started there in March.
Turkish television pictures showed wounded people being taken to hospitals in southern Turkey.
Accounts of killing in Jisr al-Shughour range from an official version of gunmen ambushing troops to residents' reports of an army mutiny. It has triggered international alarm that violence may enter a new and bloodier phase after three months of popular unrest that has left over 1,000 dead.
Turkey has built strong ties with Syria in recent years and has been exerting growing pressure on Syrian President Bashar al-Assad, with Foreign Minister Ahmet Davutoğlu calling on him to introduce "shock therapy" reforms to end the trouble.
Last month, Erdoğan said Syrian issues were almost a domestic policy issue for Turkey.
But for all Turkey's efforts to persuade Assad to pursue reform the violence in Syria has escalated.