Turks in upbeat mood ahead of polls 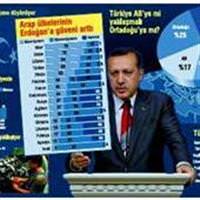 Growing numbers of Turks are upbeat about the direction of their country and becoming more positive about their economy even as other countries remain gloomy, a survey showed on Wednesday.

The survey by the Washington-based Pew Research Center was published days before a parliamentary election that is widely expected to give Prime Minister Tayyip Erdoğan's ruling AK Party a third term of single-party rule. "Under Erdoğan's leadership, Turkey has played a more assertive role in international affairs, and most Turks give the prime minister positive marks on foreign policy," said the survey, conducted by Pew's Global Attitudes Project.
It said 62 percent have confidence that he will do the right thing in world affairs.
"Erdoğan is also popular in neighboring Arab nations — most Egyptians, Jordanians, Lebanese and Palestinians express confidence in the Turkish leader," it said.
Overall, Turks were almost evenly divided about the current direction of their country, with 49 percent dissatisfied and 48 percent satisfied.
There was a similar balance of views on whether the economy was in good shape or not.
"This is a notable improvement from last year, when 60 percent were dissatisfied and 38 percent were satisfied," the survey said. In 2009, three-in-four Turks felt the country was on the wrong track.
Erdoğan has pledged to create a new constitution if the AK Party wins the election on June 12, replacing a charter created under military tutelage after a 1980 coup.
The Pew survey was conducted from March 21 to April 26. It had a sample size of 1,000 and a margin for error of plus or minus 4.0 percentage points.
While Turks continue to favor joining the EU, enthusiasm for EU accession has waned in recent years, the survey showed.
Opinion was divided on where Turkey's future lay, with 17 percent of Turks believing it should look to Europe in the future and 25 percent the Middle East. Both regions are equally important according to 37 percent of respondents.