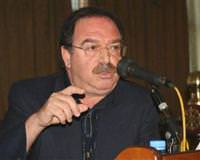 Kurdish politicians condemned on Thursday a Turkish court ruling that could prevent a jailed colleague entering parliament if he is elected when Turkey votes in three days’ time.

Lawyers for Hatip Dicle, an influential Kurdish politician, said the appeals court had rejected his final challenge to a conviction for "spreading terrorist propaganda."

Dicle is one of several Kurdish candidates currently in jail charged with links to Kurdish terrorists. The verdict dealt a new blow to the pro-Kurdish Peace and Democracy Party (BDP), which hopes to send several dozen candidates to parliament.

"An attack is being staged against our party in every sense," BDP joint chairman Hamit Geylani told a news conference in the city of Diyarbakir in the mainly Kurdish southeast.

"The judiciary has become politicized up to its neck... Why has Hatip Dicle's punishment been left until today?" he told a news conference, saying there was no obstacle to his election.

Turkish media and a criminal law expert contacted by Reuters said the ruling would prevent him taking his seat in parliament, but the candidate's lawyers rejected this.

"The basis from someone's candidacy should be the date set by the YSK (High Election Board). Hence, this should not be an obstacle stopping him being elected," said lawyer Tahir Elci.

Dicle is an independent candidate for Diyarbakir, where the BDP has strong support. The election is expected to result in a clear victory for the ruling AK Party nationwide.

Dicle became an MP in 1991 but was convicted in 1994 on a charge of membership of the PKK terrorist group. He was released in 2004 but detained again in 2009 over alleged PKK links.

Some 60 BDP-backed candidates are running as independents to bypass a threshold of 10 percent support which parties must secure to enter parliament. BDP support is seen at 5-6 percent.

A lower Ankara court convicted Dicle in February 2009 for "spreading terrorist group propaganda" for a speech he made in 2007 about the collapse of a cease-fire by PKK militants.

More than 40,000 people have been killed in the PKK's 27-year-old separatist insurgency. Kurdish politicians deny material links with the group but generally revere its jailed leader Abdullah Ocalan.

The Yargitay appeals court in March upheld Dicle's conviction and has now rejected an objection by his lawyers to that ruling, confirming a 20 month prison sentence.

In April the YSK reversed a ban on six Kurdish independent candidates. Their exclusion had sparked violent protest in the mainly Kurdish southeast and the BDP had threatened to withdraw its candidates unless they were reinstated.

BDP joint chairwoman Filiz Kocali told reporters some 2,400 people had been detained in the mainly Kurdish region in the last four months in what she said was part of a campaign against the party.