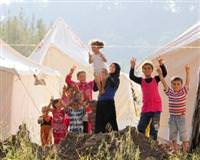 A Syrian town awaiting an army assault was nearly empty, fleeing refugees said as they crossed the border into nearby Turkey where they are shepherded into make-shift camps.

Turkey's Red Crescent set up one camp five weeks ago on the grounds of a disused tobacco factory on the outskirts of Yayladağı, a sleepy village of 6,300 where many speak Arabic as a first language and have families scattered on both sides of the border which snakes its way through verdant green hills.
In the last few days the population has swelled to bursting point with at least 1,700 refugees now living in tents as Syrians fled the nearby town of Jisr al-Shughour under attack from security forces following protests against the autocratic rule of President Bashar al-Assad.
The Red Crescent is now building a second camp as hundreds continue to arrive, picked up by scores of minibuses hurtling through the winding roads to pick up refugees. The border itself is marked just with barbed wire and a military road running along the Turkish side.
Turkish Foreign Minister Ahmet Davutoğlu said Thursday 2,400 people had now crossed into Turkey.
"Jisr al-Shughour is practically empty. People were not going to sit and be slaughtered like lambs," said one refugee who had crossed Wednesday night and who gave his name as Mohammad.
"Demonstrations in the villages are still going on. Women and children are carrying flowers and shouting 'people want the downfall of the regime'," he said.
Some 40 tanks and troop carriers were deployed about 7 km (4 miles) from Jisr al-Shughour, a town of 50,000, residents said.
Syrian authorities say "armed gangs" killed more than 120 security personnel there this week. Other accounts described a mutiny among troops who refused to fire on civilians after a pro-democracy rally in the town Friday. Loyalist military units then attacked the mutineers, according to the reports.
Injured refugees who have made it to Turkey, mostly with gunshot wounds have been taken to a hospital in Antakya, the ancient city of Antioch.
"We were leaving the mosque Friday and started demonstrating. And then the 'shabbiha' came and attacked us," said a 23-year-old man in the hospital referring to plainclothes gunmen loyal to Assad. He had a bullet wound in his lower leg which doctors had set with pins.
RELATIVES WORRIED
Outside the Yayladağı camp several Turkish families arrived, hoping to find out if their Syrian relatives were inside.
"My aunt telephoned me from Syria a few days ago to say that she would come to Turkey with her children. She was very frightened," said a 35-year old man, who declined to be named.
"I've been very worried about my relatives. I believe they are in good health, but I'm worried about what they have experienced," he said.
Turkish authorities have denied media access to the refugee camps, set in a picturesque valley, but visible behind its gate were rows of large white tents, some with washing strung between them, and children playing.
Syrian men and women sat in groups in the shade of the trees, some of them waving and appearing relaxed.
An ambulance brought a group of five more people to the camp, one woman with her hand in a bandage, carrying their belongings in black plastic rubbish bags.
"Many of us have extended family in Syria, we have been very worried about them," said Mehmet Ergurdel, a 44-year-old butcher in Yayladağı.
"The refugees I've seen pass by seem to be in good health, but they must be very afraid. May God help them. Turkey is a big country and we can look after them. Personal ties between Syrians and Turks here are very close."
After World War I and the fall of the Ottoman Empire the province of Hatay, for centuries a melting pot of religions and ethnicities passed to French-mandated Syria control. Syria gained independence in 1936 but Hatay, which had a large Turkish population, became part of Turkey in 1939.
Turkey's ties with Syria were fraught in subsequent decades, in large part because of Syria's claim to Hatay, but have improved markedly in recent years under a policy by Prime Minister Tayyip Erdoğan to reach out to Ankara's neighbors.
On a visit to the province last year Turkish President Abdullah Gül described it as a place where people of different faiths live in an atmosphere of affection.
Visa requirements between the neighbors were dropped in September 2009 and Turkish and Syrian ministers have held regular strategic cooperation meetings.
Easier access to both countries had let to a big increase in tourism before protests against Assad's government triggered a bloody crackdown.