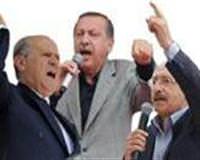 Turks begin voting for a new parliament on Sunday with the ruling center-right AK Party widely tipped to win a fresh four-year mandate.