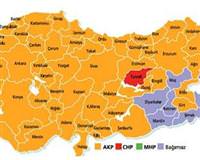 The AK Party, which won 34% of the vote in 2002 and 46.6% of the vote in 2007 has reached a historical success through garnering one out of every two votes on yesterday’s election. MHP has secured a spot in the parliament by remaining above the electoral threshold. The ‘new’ CHP increased their voter support.

Turkey's voters have elected the AK Party, which has been in power since 2002, to serve for a third term. AK Party's campaigning slogan, for 'Stability to Continue and Turkey to Grow' was well received in the poll booths.
However, voters did not grant the AK Party the authority to take a new constitution to referendum with less than 330 deputies elected. Despite increasing their voter rate from 2007's 20.8 to 25.9 percent, CHP did not reap the results they had hoped. MHP, who entered the election clouded by a video scandal managed to break the electoral barrier, however the party suffered a loss of support in both vote rates and deputies passed in comparison to the 2007 election. The BDP supported independents managed to bring the number of deputies up from 20 to 35 compared to the election prior.
AK PARTY ACHIEVES FIFTY PERCENT
As of 23:00 last night, 198,380 poll booths had been counted out of a total of 199,556. With 99.41% of the votes counted, 42,790,167 were valid votes while 913,685 were deemed invalid. According to the results, the AKP had 50 percent, CHP 25.91%, MHP had 13.03% and independents with 6.59 %.
THE SHORES FLUTTER
According to the initial election results, the AKP, which had lost votes in the coastal regions as evident by the 2009 local election, had recovered a number of votes in both coastal areas as well as in certain districts in the East and Southeast. According to the distribution of deputies, Istanbul showed the most severe increase, reaching 48.39 percent of votes in support of the AK Party. Also according to the initial results, the AK Party managed to bring down the vote ratio with CHP. With 81 district meetings held by CHP Chairman Kemal Kılıçdaroğlu, the party did not receive the rate of votes expected in Central Anatolia and the Southeast region. MHP lost voter support in comparison to the 2007 elections, with districts where running deputies had resigned following the video scandal especially suffering from losses in votes. BDP's supported independents such a much higher than expected turnout.