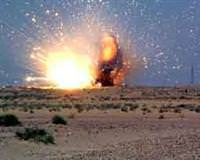 A percussion bomb exploded in southeast Turkey late on Sunday, injuring 11 people celebrating the victory of Kurdish candidates in the parliamentary election.

The explosion occurred around 11 p.m., soon after the announcement of election results, in the province of Şırnak, near the Iraqi border. Six of the casualties, who were being treated at a nearby hospital, were seriously injured. Percussion bombs generally cause limited damage.
There were no immediate claims of responsibility for the blast in the mainly Kurdish region, the scene of a 27-year-old separatist conflict.
More than 40,000 people have died in the conflict since the PKK took up arms against the state in 1984.
Kurdish independent candidates made a strong showing in the election, with 36 of them winning seats in the 550-seat assembly.