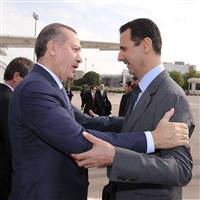 Turkey has put huge effort into improving ties with its neighbors in the Middle East but the unrest in Syria may force a rethinking of its foreign policy now that Sunday's election is out of the way.

Turkey's "zero problems with neighbors" policy has made Ankara into a regional power and Prime Minister Tayyip Erdoğan a hero in the Arab street.
But with more than 5,000 Syrian refugees fleeing across the border to escape a crackdown by President Bashar al-Assad, the long-time NATO member and European Union-candidate is reminded of the awkward position it has put itself in trying to champion democracy while befriending the region's autocratic leaders.
Erdoğan, who won a third consecutive term in Sunday's election, has stepped up his criticism of Assad after having embraced him in recent years.
"The whole policy of warming up to Syria has collapsed," said Semih Idiz, a foreign policy expert.
"After the elections I expect Turkey to reevaluate its Middle East policy. It has not brought the results expected."
Other "Arab Spring" uprisings have tested Turkey's ability to look after its new interests, but Syria -- an Iranian ally with a volatile ethnic and religious mix lying in a web of regional conflicts -- poses particular challenges.
While Turkey has urged Assad to implement reforms and has added its voice to growing international condemnation by calling the crackdown "inhumane, savage repression," Iran has supported the Syrian regime. Ankara and Tehran, which have also forged closer ties in recent years, compete for influence in Damascus.
"The Syrian crisis has the potential to make ties between Ankara and Tehran frostier. If Iran or (Lebanon's Shi'ite group) Hezbollah get involved in Syrian affairs Turkey will have to tell foreign powers to stay out," Idiz said.
Meanwhile the Syrians seeking refuge in Turkey are delighted by the decision to keep the country's doors open to them -- around 300 Syrians in the border area cheered and shouted "Long live Erdoğan" on hearing of his election win on Sunday.
RISKS
Some analysts say Turkey has been turning away from the West under Erdoğan over the past decade.
Last year, 22 percent of Turkey's exports went to the Middle East and North Africa, double the share in 2004.
While Turkey's bid for membership of the European Union has dragged on since formal negotiations began in 2005, Ankara has pursued free-trade accords with Jordan, Lebanon, Syria and Iraq.
In Libya, where Turkey had ventures worth $15.3 billion before an uprising against Muammar Gaddafi began in February, Turkish firms were forced to leave projects unfinished.
Turkey has held joint military exercises and joint cabinet meetings with Syria and has abolished visa requirements, but those agreements might now be scaled down.
Erdoğan, whose country quietly hosted a conference of Syrian opposition figures last week, has said that after Sunday's vote Ankara would talk to Assad in a "very different manner."
Hugh Pope, an analyst at International Crisis Group, said events in Syria have shown the limits of Turkey's policy and exposed the reality that Ankara has little leverage convincing Assad to change.
"Turkey is terribly frustrated at Assad, but I don't think any country has any leverage in Syria at this point. The regime is in a survival mode," Pope said.
However, he said Turkey's close business and people's ties might give it some leverage in the future.
The wars in neighboring Iraq brought refugees and severely disrupted trade with Turkey, but now Turkish firms are busy doing brisk businesses in Iraq.
"Whatever happens in Syria Turkey will adapt."
BUFFER ZONE
Turkey was caught off guard at the time of the 1991 Gulf War, when 500,000 people flooded across the border from northern Iraq, but this time has started early preparing for a possible mass influx of Syrian refugees.
When the 2003 invasion of Iraq was being planned, Turks made arrangements to set up a buffer zone inside Iraq to look after any refugees on Iraqi soil. In the event, only around 10,000 came.
Some media have reported that Turkish political and military officials are considering a similar zone in the Syria case if the number of refugees increases sharply, but officials have told Reuters they are not aware of such plans.
When asked about the possibility, Defense Minister Vecdi Gonul told reporters: "It's not on the agenda right now."
Damascus would not welcome the prospect of Turkish boots on Syrian soil.
Turkey and Syria went to the brink of war in 1998 when Ankara exerted pressure on Damascus to expel Kurdistan Workers Party (PKK) rebel leader Abdullah Öcalan who was sheltered there. The expulsion and capture of Öcalan resolved the crisis.