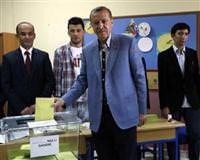 Having handed Tayyip Erdoğan his third term as prime minister, the question for many Turks is whether his next stop will be the presidency.

For the past decade Erdoğan has dominated the political landscape in Turkey, a largely Muslim nation of 74 million that he has led to the gates of the European Union by opening negotiations for membership in 2005.
His priority is to write a new constitution to replace one written almost 30 years ago during a period of military rule.
It is an open secret that he would favour a switch to a more presidential form of government, but given the likely reduced majority in parliament it may be harder for him to achieve than he had hoped.
Many people suspect his aim is to become president himself, after already holding the posts of prime minister and mayor of Istanbul, putting him in charge perhaps even to 2023, the centenary of the republic soldier-statesman Mustafa Kemal Ataturk founded after the Ottoman empire fell.
In contrast to the raki-drinking Ataturk, non-drinking Erdoğan's pedigree lies in political Islam and he is mistrusted by old secularist elites within the military and judiciary.
They see the wearing of headscarves by the wives of Erdoğan and his ally President Abdullah Gül as an affront to Ataturk's vision for a secular state.
Abroad Erdoğan's star shines brightest in the Middle East. He became regarded as a statesman in the Arab world in 2009 for his withering criticism of erstwhile ally Israel in the wake of its offensive of the Palestinian Gaza enclave.
NATO partners see him as a complicated rather than compliant ally, however, and the West has looked askance at some of Erdoğan's friendships, notably with Iran's President Mahmoud Ahmadinejad and Syrian President Bashar al-Assad.
A recent survey by the Washington-based Pew Research Centre found that Egyptians, Jordanians, Lebanese and Palestinians all have confidence in Erdogan.
But worryingly for Turkey's hope of EU entry, the majority of people in France, Germany and Spain feel the opposite.
TURNING POINTS
Back in Turkey, Erdoğan's tension with the secularist old guard climaxed in 2008, when the Constitutional Court fined his AK Party for being a focal point of Islamist activity but stopped short of banning it.
Since then, Erdoğan has consolidated his power, with police detaining military officers suspected of planning a coup and the government passing constitutional amendments to take away old cliques' control over the selection of judges.
Yet, Erdoğan has demonstrated plenty of pragmatism and conformed with the official secularism of the state while staying true to his image as a pious Muslim and man of the people.
The way the military forced his mentor, former prime minister Necmettin Erbakan, to give up power in 1997, and the subsequent banning of their party, served as an epiphany for Erdoğan, who was briefly jailed on charges of sedition.
Erdoğan packed away old ideological baggage to form a new party that he cast along conservative, democratic lines.
The birth of the Justice and Development Party, known as the AK, came as Turkey slid into a financial crisis in 2000/01.
In the 2002 election angry Turks rejected the traditional parties, and the AK swept to power. Erdoğan became prime minister in 2003, after Gül had kept the seat warm for him.
Erdoğan repaid the people's faith by leading them into a period unprecedented prosperity and giving them pride by re-establishing Turkey as a regional power.
Plain-speaking and a powerful orator, the tall, mustachioed Erdoğan is the kind of personality who appeals to many Turks.
Gruff and intolerant of criticism, he can revert to rough colloquialisms that strike a chord with ordinary people. Those same traits are disliked among more privileged classes, who can regard him as rude and arrogant.
The son of a poor sea captain, Erdoğan was raised in a gritty Istanbul neighborhood by the Golden Horn inlet.
He went to a religious school where, biographers say, he was imbued with both a sense of piety and business pragmatism.
Before his political life took off, he worked for the city's bus company and played semi-professional soccer.
While Erdoğan's image has been framed by championing the underdog, his support for Fenerbahçe, the Manchester United of Turkish soccer, demonstrates a desire to be on the winning side.