Erdoğan meets with cabinet for a final time 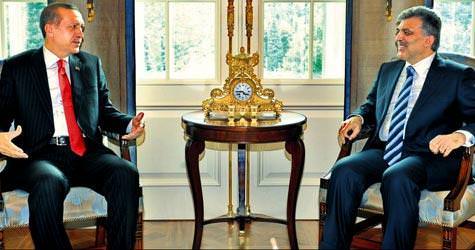 Erdoğan met with the 60th Government Council of Ministers yesterday for a final time and then moved on to the Çankaya Palace where he offered the 60th government’s resignation to President Abdullah Gül.

With the successful election results of 49.9 percent for the AK Party, Erdoğan's will be forming a new government and therefore procedure-wise had to present his resignation yesterday. Upon Erdoğan's departure, an announcement by the Presidential press Center stated; "Our President has accepted the resignation of the Council of Ministers by Mr. Tayyip Erdoğan. Expressing his gratitude for the services rendered until today, Mr. President Requests that the Council of Ministers continue their duty until the new government is formed."
Prime Minister has four main items on his agenda, now that the election has come and gone with successful results: election analysis, a new cabinet, a new constitution and a new mid-term economic program.
As the first leader in Turkey's political history to win three back to back elections, Prime Minister Tayyip Erdoğan plans to make his first task be designating the route for the new 'master era'.
Just after the election, Prime Minister Erdoğan's first task was to analyze the election results with fellow staff members. Erdoğan was read the initial report upon his arrival to the General Headquarters in the midday hours the day before yesterday. According to the findings, this time, AK Party successfully managed to win over Mersin, a province where they have not seen majority results since the 2002 election. With 11 deputies sent to parliament from Mersin, four are from the AK Party, which means they received 32.20 percent of the votes. CHP, which came in second in Mersin, received 31.39 percent, and is also sending four deputies, while MHP has two and acquired 23.25 percent of the vote. Mersin is also sending independent deputy Ertuğrul Kürkçü to the assembly.
The AK Party's 2007 record breaking province Bingöl with 71.05 percent was beat out this year by Konya. Konya was followed by Kahramanmaraş and Erzurum. The Prime Minister's homeland Rize voted 53 percent for the AK Party in the previous election, whereas this year they took fourth place with 69.09 percent of votes. Coming in first in the last elections, Bingöl took seventh after Sunday's vote with 67.05 percent
Erdoğan also got what he wanted in Izmir and Antalya. In Izmir, the AK Party almost had as many deputies as CHP elected. The AK Party also regained psychological superiority in Antalya, which they had lost in the 2009 local elections.
Erdoğan did not hold back his satisfaction of having won Antalya. In Izmir's 1st District both AKP and CHP will have six deputies in parliament, while in the 2nd District, five AK Party deputies and CHP's seven deputies were elected.
A NEW CONSTITUTION
Fast becoming a tradition, during Erdoğan's 'balcony' address he stated, 'We will draft the constitution together. We will go to the opposition." For this purpose, the judicial members of the AK Party, including Cemil Çiçek, Bülent Arınç, Sadullah Ergin, Bekir Bozdağ, Burhan Kuzu and Ahmet İyimaya amongst of others going to the assembly for the first time will be establishing a commission. By September, they will be setting up the groundwork to meet with other political parties and civil society organizations.
The 61st government will be working on the 2012 budget during the summer, while also updating a three-year midterm economic program. Within this framework, they intend to tale preventative measures for the current deficit, while also restructuring tax and insurance debt, and determining investment areas for the revenue acquired. According to information obtained, Erdoğan will be going to Azerbaijan first followed by the Northern Republic of Cyprus. With the establishment of new European Union Ministry in order to expedite relations, Erdoğan will also be paying a visit to Brussels.