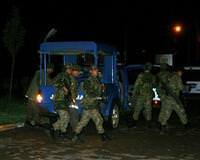 Amongst the three terrorists captures dead was Şeyhmus Amanos, one of the perpetrators responsible for the December 7th, 2009 attack in Tokat in which seven soldiers were killed, including a lieutenant and three others were wounded. Şeyhmus Amanos' responsibility in the attack was revealed through trasnmitter conversations with other members of the terrorist group. Jailed Kurdistan Workers Party (PKK) leader Abdullah Öcalan last month threatened "war" unless the government enters talks after the election, setting a deadline of June 15.
Several hundred troops, backed by helicopters, launched an operation against a group of up to 10 PKK terrorists early on Tuesday in Sivas province, far from the usual area of conflict in the mainly Kurdish southeast of Turkey, the officials said.
They said the PKK group was believed to have been on its way from the eastern province of Tunceli to the northern Black Sea region when they were detected in Sivas' Imranli district.
Military operations were continuing in the area…
Prime Minister Tayyip Erdoğan, whose AK Party claimed a decisive victory in Sunday's election, has said that although some state officials have held talks with Öcalan, his government would not hold talks with what Turkey, the EU and United States designates a terrorist organization.
In statements issued through lawyers who pay weekly visits to his prison cell on Imrali Island south of Istanbul, Öcalan has said previous agreements had been broken.
He has not yet commented on the election outcome, which resulted in 36 Kurdish-backed candidates entering parliament, compared with a group of 22 deputies in the previous assembly.
The PKK launched an armed insurgency in 1984 and more than 40,000 people have been killed in the conflict, the majority of them Kurds.
The terrorists ended a six-month ceasefire in February, but have characterized their stance since then as "active defense".
Last Update: Jun 15, 2011 3:51 pm
RELATED TOPICS