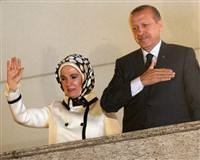 Erdoğan, who has transformed Turkey into one of the world's fastest-growing economies and piloted assertive foreign policy, won Sunday's parliamentary elections with nearly 50 percent of the vote.
Here are some the most immediate foreign policy and domestic challenges he faces.
SYRIAN UNREST
Under its "zero problems with neighbors" policy, Turkey has made a huge effort to improve political and economic ties with Middle Eastern neighbors. But, having cultivated good relations with autocratic leaders, Turkey's diplomatic skills are being put to the test by the "Arab Spring" uprisings, as it supports people's demands for greater democracy in the region.
The most pressing crisis is in neighboring Syria. Thousands of refugees have fled to Turkey to escape a bloody crackdown by President Bashar al-Assad. Having embraced Assad as a friend and urged him to make reforms, Erdoğan has become increasingly critical of the Syrian government's use of force against its own people.
It is unclear what leverage Ankara has, but Erdoğan has said that after Sunday's vote Ankara will talk to Assad in a "very different manner."
Turks are prepared for a further possible mass influx of Syrian refugees along the 900-kilometre border. Turkey said on Monday 6,817 Syrians had crossed the border.
ISRAEL AND GAZA-BOUND FLOTILLAS
Ties between Turkey and Israel were strained after Israeli marines stormed a Gaza-bound Turkish aid ship, killing nine Turkish activists in May 2010.
Turkey has said it cannot stop pro-Palestinian Turkish activists from sending a fresh convoy to Gaza planned for late June. Israel has warned future flotillas will be intercepted for security reasons, setting the stage for possible confrontation.
Foreign Minister Ahmet Davutoğlu has said the onus is on Israel to apologize for the killings in order to reestablish ties, seen as supportive of U.S. interests in the region.
Erdoğan's fiery criticism of Israeli policies toward Palestinians has turned him into a hero in the "Arab street" and won applause home. Analysts do not expect Erdoğan to change his attitude toward Israel.
EU MEMBERSHIP
Analysts say Erdoğan needs to focus on reviving Turkey's EU bid, which remains stalled. Erdoğan announced last week he planned to set up a new ministry for relations with the EU as part of a ministerial shake-up. But support for EU membership among Turks is declining and many question why dynamic Turkey would want to enter a union plagued by debt and slow growth.
Turkey could break a deadlock in negotiations by opening its ports and airports to traffic from EU member Cyprus. With the election out of the way, a move that dices with nationalist sentiments would be less risky and could be worth taking.
It would force the EU to unfreeze several remaining chapters, or subject areas, for negotiation.
NEW CONSTITUTION
Erdoğan failed to win enough seats to call a referendum on a planned new constitution, but this is unlikely to deter him, given his AK party polled nearly 50 percent of the vote -- its highest mark since it first came to power in 2002.
Erdoğan has said he will seek consensus but it remains to be seen how he will approach the reform. Erdoğan may still seek to win defectors from other parties to bring his 326 majority above the 330 seats required. If he tries to push his way through, as he has done in the past, political tensions will rise.
KURDS
There are compelling reasons for Erdoğan to have another go at resolving the Kurdish problem to quell a decades-long separatist insurgency. Electoral gains made by Kurdish independents were a message to Erdoğan to engage more fully, after his failure to follow through on his initiative to grant Kurds more cultural rights two years ago.
He may not want to be seen to be bowing to pressure from Abdullah Öcalan, the jailed leader of militant Kurdistan Workers Party (PKK), who threatened a "big war" if the government failed to begin serious talks days after the election.
OVERHEATING ECONOMY
Having built a reputation for ending Turkey's financial meltdowns of the past and making it one of the world's fastest growing emerging markets, the government needs to make sure it avoids any pitfalls.
Analysts are calling for the government to take stronger measures to curb growth which risks reigniting inflation.
Specifically, they want the central bank to adopt a more orthodox strategy by raising interest rates, and the government to pitch in with fiscal tightening.