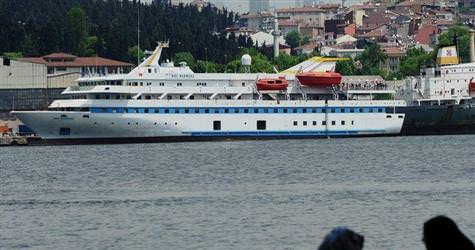 Turkish pro-Palestinian activists said Friday an aid flotilla will sail for Gaza this month to defy an Israeli blockade, but without the Mavi Marmara ship that was stormed by Israeli commandos a year ago.


"The Mavi Marmara unfortunately suffered so much damage we couldn't get it ready in time," Bulent Yildirim the head of the IHH, a Turkish Islamic charity, told a news conference.

Already strained relations between Turkey and Israel worsened after Israeli soldiers shot dead nine Turks aboard the Mavi Marmara, the lead ship in a convoy of six vessels bound for the Palestinian enclave last year.

The Israelis opened fire after a boarding party was attacked and injured by activists.

Yildirim said ten ships would sail for Gaza from ports around Europe on June 25.

The activists said in May that 1,500 people from around 100 countries would participate in the flotilla, carrying, humanitarian aid and construction materials to Gaza.

Israel has not met Turkish demands for an apology and compensation for the families of victims in last year's assault on the Mavi Marmara.

Israel has said it will block the new flotilla while Turkey has said it cannot stop people seeking to challenge a blockade of two million Palestinians in Gaza, and has warned Israel of serious consequences if there is any repeat of last year's bloody events.

Gaza is controlled by Hamas, which calls for the destruction of Israel and is regarded as a terrorist group by Western powers, including the United States and the European Union. Israel says it blockades Gaza to stop the importation of arms.

Earlier this month Foreign Minister Ahmet Davutoglu said the impact of Egypt opening the opening of the Rafah border gate with Gaza needed to be assessed, apparently discouraging a new flotilla.