Israel's Netanyahu reaches out to Turkey 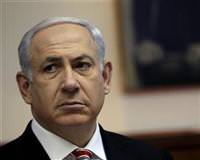 Benjamin Netanyahu has written to Tayyip Erdogan in a bid to repair Israel's relations with Turkey, an Israeli official said on Tuesday, a year after a deadly Israeli raid on the high seas caused a crisis in ties.

An Israeli official, speaking on condition of anonymity, said the Israeli leader had sent the letter to the Turkish prime minister to congratulate Erdoğan on winning a third term after a June 12 election.

Beyond that primary reason for the letter, the official said it also "signaled an interest" from Netanyahu to repair once-close ties that have frayed in recent years.

Turkey has long been Israel's closest friend in the Middle East, but the relationship has deteriorated, reaching a new low last year when Israeli commandos stormed a Turkish-backed flotilla bound for Gaza, killing nine Turkish activists.

"Israel regrets the deterioration in its relationship with Turkey. We think a good bilateral relationship is in the interests of both sides. And we hope that it's possible to have a more positive dynamic in the relationship," the official said.

In recent years Israel faults Turkey for strengthening ties with its enemies Syria and Iran, while Turkey accuses Israel of fomenting instability with its policies toward the Palestinians.

A senior European diplomat said this week that the turmoil in the Middle East could actually prove positive for Israel-Turkish ties.

"One good thing that could come out of the Arab Spring for Israel is an improvement in its relations with Turkey," the diplomat said, adding that turmoil in Syria had upset Turkey's regional policies.

The United Nations is due to publish a report into last year's raid on the flotilla next month.