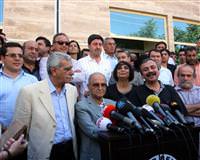 Turkey's Kurdish party on Thursday threatened to boycott parliament, which might force by-elections that could enable the newly re-elected government to reach the majority it covets to pass a new constitution.

Prime Minster Tayyip Erdoğan's AK Party won 326 seats in the 550-seat parliament in a June 12 vote, short of the 330 it needs to call a referendum on plans to reform the constitution.

The Kurdish Peace and Democracy Party (BDP), which won 36 seats, said it would not attend parliament unless an elected deputy barred from parliament was allowed to take his seat.

The election board this week awarded Hatip Dicle's seat to a candidate from Erdoğan's party who had been the runner-up after ruling that Dicle could not attend parliament because of a past conviction for spreading terrorist propaganda.

"We will not go to the parliament unless the government and the parliament takes a concrete step to clear the way for democratic politics," Serafettin Elci, a Kurdish lawmaker told a news conference in the Kurdish city of Diyarbakir.

"The AK Party should immediately return its stolen seat to the one who deserved it. We urge all democratic parties to take democracy's side against these operations that hurt the peace process."

Members of the new parliament are due to be sworn in on June 28. A BDP boycott would trigger by-elections.

In Diyarbakir, the largest city in the mainly Kurdish southeast, thousands of protesters took to the streets. The Kurdish bloc's strong showing, up from 22 seats in the previous parliament, had raised hopes among Kurds that Erdogan would work harder to end the long-running Kurdish conflict.

"Kurds should raise their voice against this election and the government's policies," protester Mehmet Dogan said.

The official gazette published final election results on Thursday showing the AK with 327 seats, the BDP with 35, the main opposition Republican People's Party (CHP) with 135, and far-right Nationalist Movement Party (MHP) with 53.

The election board and courts are still to decide whether to release from jail five other successful Kurdish candidates and a retired general fielded by a far-right party who is awaiting trial on charges of taking part in a plot to topple the government.

AK would stand to gain more seats if these elected politicians were disqualified, possibly getting past the 330 mark, which would enable it to call a referendum -- though the means used might create a voter backlash against AK.

Deputy Prime Minister Bulent Arinc urged the BDP to reconsider, while an AK official said the election board was an independent institution and had no links to the government.