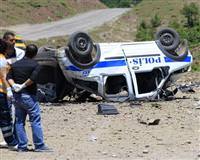 A remotely activated mine exploded in Tunceli just as a police car which was on patrol passed by on Tuesday. The two police officers in the car were killed from the blast. The explosion took place on the Dereova road, approximately one kilometer away from the district center, when a mine, previously planted by the PKK terrorist organization, exploded as a police patrol passed by. After the blast, a number of police and a medical team arrived to the scene. The police patrol vehicle had been turned upside down and a 1.5 meter wide cavity resulted from the explosion. Parts from the vehicle were recovered 100 meters away. The road was closed down due to the potential of a second mine. Police and commando teams have begun an operation in the area.
Meanwhile in Mersin, three blast bombs exploded in the vicinity of the Police Headquarters. One police officer was lightly wounded and no one was killed. A bomb blast was also set off in Diyarbakır near police quarters. An investigation has been initiated into the incident; however no one was killed or hurt.