'Palestine is our national cause’ 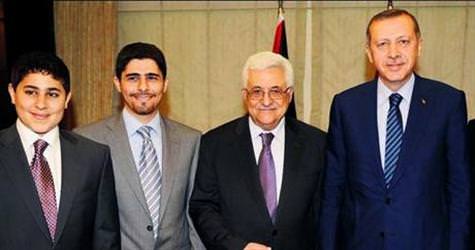 While Turkey received a number of warm messages from Israel following the June 12th parliamentary election, Prime Minister Erdoğan has proceeded to criticize Israel’s Gaza policy and states, “Palestine is our national cause.”

While Palestinian Leader Mahmoud Abbas does rounds in Ankara, he also paid a one and a half hour meeting with Erdoğan. After the meeting, Erdoğan relayed the following to the cameras: 'INHUMANE OCCUPATION'
Peace and harmony is reclaimable in the Middle East so long as the Palestine-Israel discord is solved in a just and permanent manner. An independent Palestinian state with East Jerusalem as the capital is a basic requirement for a solution to this issue.
Turkey considers the Palestinian case to be our own national cause and will always remain on the side of our Palestinian brothers. Turkey, as it has done in the past, will continue to defend the Palestinian cause on all platforms and will provide all the support possible for our Palestinian brothers to be able to live a humane life with all of the liberties they deserve.
We have witnessed fast development in both the economic and security environment in the West Bank. Unfortunately we don't see a positive outlook for the Gaza Strip. Subjected to Israel's inhumane and illegal occupation, unfortunately we do not see the same development in the Gaza Strip. There are still one and a half million people in the region that do not have their basic needs fulfilled. The inhumane and illegal blockade must come to an end as soon as possible.
Unfortunately there is an unbefitting view of humanity in Jerusalem today, a place where for thousamds of years people of differing religions, languages and ethnic routes lived together in peace.
We believe that the compromise between them will serve towards our Palestinian brothers obtaining the liberties and humane lives that they deserve. We have expressed to Abbas that we do not want to see our brothers shed blood. Palestinian State Leader Mahmoud Abbas has assured us that the government will not back away from the compromise reach with the Hamas administration and al-Fatah.
Abbas also stated that in regards to UN membership, they have full belief that Turkey will stand next to Palestine.