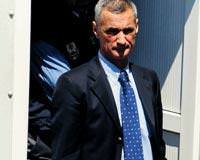 A Turkish court ruled on Friday that a retired general should not take his seat in parliament because he was in custody on charges related to an alleged plot to topple the government.

The ruling, which follows the disqualification of three other opposition members who won seats in the June 12 election, could bring Prime Minister Tayyip Erdoğan's party closer to obtaining the 330 seats needed to call a referendum on constitutional change without the support of other parties.

General Engin Alan won a seat in Istanbul for the far right Nationalist Movement Party (MHP) despite being held in Silivri prison with close to 200 others charged in the "Sledgehammer" case, which centers on an alleged military plot in 2003.