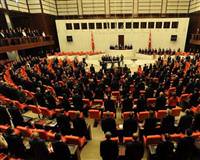 Prime Minister Tayyip Erdoğan's third term got off to a turbulent start on Tuesday when the main opposition party and minority Kurds boycotted parliament's swearing-in to protest against bans on elected candidates.

The boycott meant more than 30% of elected MPs refused to take their oath as parliament convened for the first time since the June 12 election in EU candidate Turkey, a country often cited as a model for democracy in the Muslim world.
Erdoğan's AK Party, which has turned Turkey into one of the world's fastest-growing economies, had promised after its comfortable election win to seek consensus on a new constitution.
But the boycotts by the main opposition Republican People's Party (CHP) and the pro-Kurdish Peace and Democracy Party (BDP) could force mass by-elections and stoke separatist violence in the restive, mainly Kurdish, southeast.
The CHP won 135 seats in the 550-member parliament, while the BDP won 36.
"We will not take the oath unless the way is open for all our deputies to take the oath," CHP leader Kemal Kılıçdaroğlu said, after a court rejected an appeal for the release of two CHP candidates under detention without having been convicted.
Eight elected candidates -- five from the BDP, two from the CHP and one nationalist -- have been barred from taking their seats by courts for being in jail. Their seats will remain vacant.
A ninth candidate from the BDP, the party supported by the bulk of Turkey's 15 million Kurds, had his seat stripped by the election board because of a conviction for spreading "terrorist propaganda". The seat was awarded to a runner-up from AK.
Erdoğan's AK, a socially conservative party with Islamist roots, has 327 seats following the reallocation of the seat.
Should other seats be given to AK as well, the disqualification of opponents could take it past the 330-seat mark, which would give Erdoğan a large enough majority to call a referendum for a new constitution without the support of other parties.
The Turkish lira weakened on Tuesday after making earlier gains on optimism the Greek parliament would pass measures to avoid a default.

KURDISH UNREST
The Kurdish bloc's strong showing, up from 22 seats in the previous parliament, had raised hopes among Kurds that Erdoğan would work harder to end the long-running Kurdish conflict and address Kurdish grievances in a new constitution.
Any decision to call by-elections would carry the risk of provoking more unrest in the southeast, where protesters have clashed with police following the board's decision last week.
With tensions rising, security forces on Tuesday killed three Kurdish militants from the PKK group, which ended a six-month ceasefire in February.
President Abdullah Gül had appealed to all parties to resolve their difference in parliament, but the BDP block stayed in the Kurdish city of Diyarbakır, while CHP candidates attended parliament but did not take their oath.
AK officials say the Election Commission and courts act independently, but opposition parties are crying foul.
There are no constitutional or parliamentary rules governing what should happen if winning candidates refuse to be sworn in.
There is a rule that if more than 5% of MPs resign their seats will be thrown open for by-elections, but as candidates cannot resign unless they have been sworn-in, it leaves the issue in a grey area.
After the oath-taking, MPs were due to submit applications for the speaker's post. Once a speaker is elected, the next step is for the new government to unveil its program for a confidence vote, after which parliament goes into recess until October 1.
Parliament sources said the legislature could remain open after a new speaker is chosen to deal with the problems. They said elected MPs could take their oaths at another time.