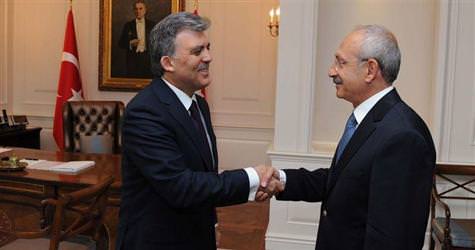 President Abdullah Gül is stepping in to overcome the oath crisis which surfaced following the court's refusal to release elected deputies that are still incarcerated. The court ruling has resulted in both the People's Republic Party, or CHP, deputies and independent elected deputies to boycott the oath signing ceremony for the new assembly.
Gül has since invited Kemal Kılıçdaroğlu, the leader of the main opposition party as well as the BDP or Peace and Democracy Party supported independent deputies Şerafettin Elçi and Ahmet Türk to the Presidential Palace. Gül was scheduled to meet with the CHP leader today at 11:00 and will host with the independent candidates that did not take part in the oath signing ceremony, Mardin MP Ahmet Türk and Diyarbakır deputy Şerafettin Elçi tomorrow at 11:30. Taking into account the rising tension due to the presence of CHP members who did not take their oaths at the session, President Gül last night made a move step in. Gül is expected to relay his discomfort with the oath boycott to Kılıçdaroğlu as well as to Türk and Elçi. As part of his initiative in light of the crisis, Gül will exchange views on how to establish reconciliation between parties and to solve the oath crisis issue.

INFLUENTIAL FIGURE FORMULA
Instead of meeting with the administrators of BDP, which staged the boycott, President Gül chose instead to host Ahmet Türk and Şerafettin Elçi, whom are regularly displayed as being influential Kurdish figures. Having met with Türk for a variety of reasons in the past, Gül's relationship with Elçi also goes way back. As a former minister, Elçi is close to Gül, with their relationship spanning back to the National Vision times. Elçi describes their relationship by stating, "We have attended a number of international meetings together. Gül is a flexible and moderate individual. This invitation has pleased us. We will go amicably. We are not rejecting the state; we just want the issues surrounding the established order eradicated."

BAHÇELİ WILL NOT BE PARTAKING
In addition to inviting CHP and BDP representatives to discuss the oath crisis, Gül also extended an invitation to MHP leader Devlet Bahçeli. However, according to information obtained, Bahçeli rejected the invitation due to his busy schedule. On August 1st, 2009, Bahçeli had refused to discuss the 'initiative' and on March 4th 2010, he also refused to accept an invitation extended to oppositional party leaders.

Erdoğan to deliver a message at an AK Party group meeting…
Prime Minister Tayyip Erdoğan is expected to deliver a number of important messages to the CHP and BDP deputies that are involved in the oath boycott. At 11:00 today, Erdogan was scheduled to meet with the party group at the AK Party Headquarters. Erdoğan was scheduled to make a press release regarding the oath ceremony crisis which evolved following the court refusal to release elected deputies at the same time that CHP Chairman Kemal Kılıçdaroğlu is scheduled to meet with the president. Following the group meeting, Erdoğan will meet with Amr Moussa, the former secretary general of the Arab League. Erdoğan will also be meeting Chief of Genera Staff Işık Koşaner and in the evening hours will depart for Istanbul.