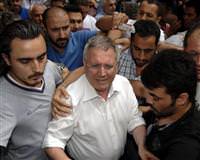 Turkey has been rattled by the biggest match rigging scandal in the nation’s football history, with operations staged yesterday in 60 different locations throughout the country.

Fenerbahçe Chairman Aziz Yıldırım is amongst a number of high profile names including both team administrators and footballers being charged with game-fixing.
Should the accusations prove true, Fenerbahçe could be facing the following harsh consequences:
1) Relinquished of Super League Championship title.
2) Forbidden from playing in the Champions League.
3) Relegation along with Sivasspor and Eskişehirspor.
4) Starting off in the Bank Asya League with a deficiency of points.
5) Aziz Yıldırım may be facing six charges and up to 60 years' sentencing.

Fifty people have been detained throughout Turkey for allegations of match-fixing including Fenerbahçe Chairman Aziz Yıldırım, Fenerbahçe Club Deputy Chairman Şekip Mosturoğlu, Eskişehirspor Technical Director Bülent Uygun, Eskişehirspor Menager Ümit Karan, Sivasspor Chairman Mecnun Odyakmaz and footballers Mehmet Yıldız, Emmanuel Emenike and Sezer Öztürk. Yıldırım is at the top of the list, being charged with "leading and forming an armed criminal organization for profiteering." The operation itself was staged based on allegations of "forming a criminal organization, match-rigging and distributing bonuses as incentive." The investigation began last December upon a beating of Giresunspor's former chairman Osman Çırak. After the incident, it was revealed that Olgun Peker was Sedat Peker's adopted son, and soon after police acquired details that a match-fixing strategy was in play.
At present, police are investigating into a total of 15 games played for the Spor Toto Super League and five games in the Bank Asya league. After an eight month investigation, Istanbul's Organized Crimes Department pressed the button on what could easily be referred to as the biggest operation in Turkey's Football Federation history. Fifty arrests were made yesterday from sixty different locations in 15 districts including Istanbul, Trabzon, Izmir, Adana, Eskişehir and Sivas. Searches were also conducted on the Fenerbahçe, Sivasspor, Trabzonspor and Beşiktaş clubs, and police went so far as to raid Fenerbahçe's Şükrü Saracoğlu Stadium. According to sources the number of detainees may increase to 70.


200,000 TL DEPOSITED TWICE
According to information obtained, prior to the Eskişehirspor- Fenerbahçe match, a sum of 200,000 TL was deposited each to accounts belonging to both Eskişehirspor Technical Director Bülent Uygun and footballer Sezer Öztürk. Fenerbahçe went on to win the game by 3-1. A search was also conducted at the Sivasspor Facilities yesterday, commencing at 6:30 a.m. The evidence recovered from the approximately five-hour long raid, was then taken to the police department. Sivasspor Technical Director Rıza Çalımbay has offered his support for apprehended goalkeeper Korcan Çelikay, by stating that he "trusts him all the way." Çalımbay states, "I believe that that game was played on the field. Spectators can also attest to this, we struggled brilliantly for the win. The goal scored against Korcan was just like another scored against Volkan."


ZEKERİYA ÖZ INITIATED
The first stage of the investigation was initiated by Special Authority Public Prosecutor Zekeriya Öz. It has been revealed that the prosecutor in charge of the Ergenekon investigation, Zekeriya Öz, initiated the investigation into match-fixing in December of 2010 following receiving a tip. When Öz was later reappointed as Deputy Chief Public Prosecutor by the Supreme Board of Prosecutors and Judges, the file was handed over to Special Authority Public Prosecutor Mehmet Berk. According to allegations, Fenerbahçe rigged a number of games and also offered bonuses to the rivals of their main competitors in the race for the championship, Trabzonspor. Also according to allegations, it was Aziz Yıldırım who was directly in charge of distributing incentive bonuses and fixing matches.
Supposedly it was Metin Korkmaz, a close associate of Aziz Yıldırım who would distribute the money. Korkmaz would act upon Yıldırım's directive to ensure that nothing showed on the Club's records, and if need be, money would be obtained from Fenerbahçe businessmen. In all monetary transactions, Ali Kıratlı was used as 'the purse'.
The match-fixing strategy was broken down into five separate groups; club chairmen, administrators, former administrators of Turkey's Football Federation, managers and footballers and was run by Olgun Peker and Aziz Yıldırım. Fenerbahçe Chairman Yıldırım has been apprehended for charges of "founding an armed organization for profiteering, as well as directing and being a member of an organization intending to commit crimes."

Yıldırım is also being charged with rigging Fenerbahçe's games as well as distributing incentives to teammates playing against Trabzonspor. It is for these charges that Special Authority Public Prosecutor Mehmet Berk has decided to put six games from the 2010-2011 Spor Toto Super League under the magnifying glass. Amongst these games are Fenerbahçe's played against Sivas, Eskişehir, Ankaragücü and Karabük as well as the Eskişehir-Trabzonspor game.

EMENİKE IS ON CAMERA
A number of telephone conversations have been caught up in tracking that refer to Emenike, Sezer Öztürk, Ümit Karan and Bülent Uygun receiving money from Fenerbahçe. According to allegations, Eskişehirspor's Sezer Öztürk and Karabükspor's Emenike were told. "If Fenerbahçe becomes champions, then we will transfer you for your services." Both footballers were indeed transferred to Fenerbahçe as soon as the league came to a close. Claiming an injury despite having obtained a doctor's report, Emenike refused to play against Fenerbahçe and supposedly received a bonus for his actions. Emenike was caught on camera by police as he received money for refusing to play.

TRABZONSPOR ALSO SEARCHED
According to allegations, Trabzonspor also attempted to fix games, however was unsuccessful at doing so. Therefore Trabzonspor was also investigated, yet no administrators were apprehended.