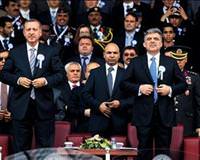 Stating we will seek rapprochement with the MHP, Erdoğan has also sent out signals that the CHP deputies which have refrained from taking their oaths may be dropped.

Erdoğan says; "Absenteeism is an issue as long as they continue to refrain from taking their oaths."
Announcing that they would be seeking a consensus with MHP or the Nationalist Movement Party, Prime Minister Tayyip Erdoğan also put forth the notion that the CHP MP's which are refusing to take their oaths, may be considered as absentees. Erdoğan, "As long as they continue to not take their oaths, absenteeism becomes an issue. This means they are not participating in the general assembly as well as in legislation efforts. It cannot continue like this."
Prime Minister Erdoğan answered questions from the press following the appointment of Cemil Çiçek as Speaker of the Parliament:


CONSENSUS WITH MHP
(Regarding Çiçek Speakership) "This is good fortune. He is an individual who is well versed on both the parliament as well as recent political history. Mr. Cemil has a strong charisma in respect to his judicial mission and will put forth a successful performance within this troublesome period experienced in the parliament. As a well-known figure, this position befits him.

(On Çiçek's statement that we should not 'make our hands into fists") It was quite good. It is my desire for hands not to be clenched. When hands are clenched they turn into fists. And that ends up being directed towards peace.

(On CHP's boycott and working on the constitution) If we are able to reach a consensus with the MHP and reach a common ground, then we will be able to fulfill the promises made for the constitution. What is this common ground? We will sit with all civil society organizations; we will do the work and will have seriously opened the door in regards to service to this country.
Our greatest desire is for CHP to be involved in these efforts as the main opposition party. It is important in terms of adding strength to the democratic parliamentarian system. However the attitude they have adopted thus far is an incorrect one. In other words, this is a very painful example of not comprehending the law of parliament. We have no biases. Serving our nation is our priority. Other than that, there is no issue of us feeling any sort of grudge or hatred towards anyone.

(On CHP MP's beign considered absent…) Right now the parliament is working. As long as they continue to refrain from taking their oaths, absenteeism is an issue. Joining in the general assembly does not equate to participating in the legislation procedure. Just today there was a very important item of legislation conducted. However, in this legislation procedure, they were counted as absent.

(In October will you open the way for MP's to be dropped?) It cannot continue this way.

(Kılıçdaroğlu's response stating that Erdogan made a rude statement.) They can say that. Everyone can speak for themselves. I am speaking the truth. I am very well aware as to where what I say goes. If you get up and state that you 'will refrain from taking your oath while your comrades are not able to' then you are locking yourselves into something. If you take your oath tomorrow, then that means licking what you spat out.
CHP's Oktay Ekşi has quite literally fulfilled all of his obligations to date and for this, we thank him.

(What is on the agenda from here on out?) Our agenda is to serve our people. Our objectives are geared towards 2023. We want stability to continue and for Turkey to grow. There is no stopping, we will continue on our path."