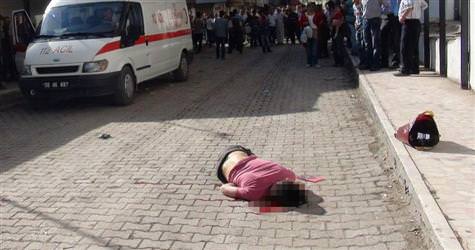 Two specialist sergeants were shot to death as they left their homes to go to work in Yüksekova. Sergeant Karakaya had only been married for a month and a half and sergeant Özkozanoğlu's wife was five months pregnant.

The two specialist sergeants were victims of an armed attack in Hakkâri's Yüksekova district. Both were shot down yesterday morning at seven as they departed their homes to head to work. Supposedly there were two perpetrators who fled the scene. Security forces have detained ten possible suspects. Both sergeants lived in the same apartment located on Nedim Zeydan Street. One was 26-year-old Yahya Karakaya and the other sergeant was 25-year-old Murat Özkozanoğlu.
SHOT FROM BEHIND
The two sergeants, both serving in the Hakkari Mountain and Commando School since 2008 and in civilian clothes, as dictated by their professional positions with the Turkish Armed Forces, were ambushed from behind and at close range by two as of yet unidentified perpetrators, as both sergeants were lighting their cigarettes. One sergeant had nine bullet wounds, while the other was riddled with 13. They were found collapsed in the street and covered in blood, both died on the scene. The perpetrators ran following the attack and the bodies of the murdered soldiers were taken to the Yüksekova State Hospital. The murderers used nine millimeter weapons and the attack took place just 50 meters away from the Yüksekova District Police Department and 200 meters' distance from the battalion they were assigned to. Ten people have been detained in connection to the attack. Teams from the District Gendarmerie Command as well as the police have initiated a widespread investigation. Control points have been set up at designated entries and exits in the district. Meanwhile, security forces have apprehended ten individuals deemed suspicious in the attack. Meanwhile, when an armored vehicle belonging to a military convoy engaged in the operation flipped over, nine soldiers were wounded in the accident.
F-16'S ARE IN THE AIR
Teams staging the operation are also being supported by helicopters. Diyarbakır also experienced significant air traffic following the attack. Immediately after the ambush F-16's from the 2nd Air Force Command took off for the border region. Security forces are still engaged in the operation.
Four months left to become a father…
The painful news hit the home of Murat Özkozanoğlu in Adana like a stone. Members of the Gendarmerie Command and the Police Department delivered the news, upon which the deceased soldier's mother had to be taken to the hospital. It turns out; the sergeant who was killed in the line of duty had a wife, Neziha Özkozanoğlu, who was five months pregnant. Drowning in tears, the sergeant's father Yaşar Özkozanoğlu states, "I am saddest most of all for our daughter-in-law and the baby that she is now carrying." The sergeant's sister Hülya Özkozanoğlu states, "We spoke on the phone just a day ago. I don't want to believe that he is dead." The oldest of three siblings, Murat Özkozanoğlu will be buried today at Kozan.

Newly married…
The family of deceased sergeant Yahya Karakaya was also devastated from the news. Residing in one of Turkey's Housing Development Administration (TOKİ) residences in Kayseri's Melikgazi district, Karakaya's father Kamil Karakaya exclaimed in tears, "My son, were you not carrying a weapon? You were our backbone. You were the apple of my eye. You just got married. You were going to bring me a grandson, where have you gone?'
As prayers were read in the home, Karakaya's mother Salime fainted and had to be treated by medical teams. Military personnel tried to console the sergeant's father. A Turkish flag was hung up in the family home. Yahya Karakaya was just married on May 14th to Funda Adile Karakaya. After moving his family into a home he purchased from TOKİ, Karakaya went to Yüksekova for his duty on June 15th. His wife Funda Adile Karakaya, had just come to see him three days prior. When she heard the news of her husband's death, Funda had to be admitted to the hospital. Sergeant Karakaya will eb buried today at the Kartal Veteran's Cemetery.