A master cabinet for a master era 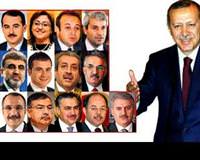 With six new names and four left off the list, three ministers were switched to establish the 61st government, leaving the era of an 11 ministry state behind. The cabinet meets today for the first council of ministers, and the official handing over of the cabinet will be completed today.

Prime Minister Tayyip Erdoğan has announced the cabinet for the self-described 'master era'. The 26-member new cabinet has six new names, while four names were left off and three ministries were switched.
Eleven ministries have become a part of history with the formation of the nation's new government. After announcing the new cabinet, Prime Minister Tayyip Erdoğan, stated that the first Council of Ministers would be held today at 11:00. The handing over ceremony of the ministries was also held today. Today at noon, Prime Minister Erdoğan went to the Çankaya Palace to present the new government to President Abdullah Gül. After the one hour and six minute meeting, Erdoğan departed the palace and moved on to the New Prime ministry Building to make an announcement. There, Erdoğan announced President Gül's acceptance of the new cabinet and went on to thank every individual that was not included.
MOST NOTABLE FACTORS OF NEW CABINET
The sole female minister on the new cabinet is Fatma Şahin, the Minister of Family and Social Policy. The youngest minister is Suat Kılıç named Minister of Youth and Sports.
Six new names: Bekir Bozdağ (AK Party Group Deputy Chairman), Fatma Şahin (Women's Wing Chairman), Suat Kılıç (AK Party Group Deputy Chairman), Erdoğan Bayraktar (former chairman of Turkey's Housing and Development Administration, or TOKİ, and Trabzon Deputy), İdris Naim Şahin (AK Party former Secretary General-Advisor during Erdoğan's era as Municipal Mayor) and İsmet Yılmaz (Former Navy Undersecretary, former Minister of Transportation, during the election era).
New deputy- new minister: Former TOKİ Chairman Erdoğan Bayraktar and İsmet Yılmaz have been elected as MP's for the first time ever and appointed as ministers.
Elected as deputies, yet left off the list: Vecdi Gönül, Faruk Özak, Nimet Çubukçu and Mustafa Demir wwere not included in the new cabinet.
Not elected as deputies and left off the list: While Mehmet Aydın decided on his own to not run, Selma Aliye Kavaf did not make the list.
Trading places: Beşir Atalay, the Minister of the Interior has been reappointed to the position of Deputy Prime Minister. Faruk Çelik has been moved from Deputy Prime Minister to Minister of Labor and Social Security. Ömer Dinçer has moved on to become Minister of National Education from his previous State Minister position. .
Those that remain: For the 61st government, Bülent Arınç, Ali Babacan, Egemen Bağış, Taner Yıldız, Binali Yıldırım, Ahmet Davutoğlu, Recep Akdağ, Mehmet Şimşek, Sadullah Ergin, Nihat Ergün, Ertuğrul Günay, Veysel Eroğlu, Zafer Çağlayan and Hayati Yazıcı will all remain in their previously appointed positions from the 60th government.
Record-braking minister: Recep Akdağ is the first ever individual in the history of the republic to be appointed as minister of Health for a fourth term consecutively. Having served the AK Party government continuously for the past eight years and one month, Erzurum Deputy Prof. Dr. Recep Akdağ is nearing a record for being the minister to serve in one single position for the longest amount of years in the republic's history.

Vote of Confidence on July 13th
Prime Minister Tayyip Erdoğan has presented the 61st government to the Çankaya Palace. And therefore Turkey's Grand National Assembly has officially begun their annual schedule. Accordingly, as of July 8th the parliament will be presented to the General Assembly and deliberations will begin July 11th. The 61st government's vote of confidence will be held on July 13th.