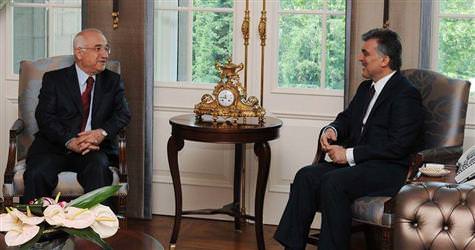 Receiving an order from President Gül to “solve the assembly issue through cooperation” Çiçek will soon be putting a three-stage formula into effect; “A period of moderating, making a declaration and establishing a commission.”

Ankara has been trying to figure out a formula to solve the oath crisis, ever since Prime Minister Erdoğan mentioned the July 15th 'slip of the tongue'. There has been intense diplomatic traffic between parties, the presidential palace and the assembly in order to implement a three-stage formula involving "a period of moderation, establishing a declaration and founding a commission consisting of jurists."
Accordingly, in an attempt to reach a solution, all sides will be making announcements geared towards lowering the tension. Secondly, an announcement will be made in regards to the unpleasant situation involving the MP's that are currently incarcerated. The third stage consists of the founding of a commission including jurists in order for legal steps to be taken to solve the current crisis. Within this formula framework, the first line of action transpired when Speaker of the parliament Cemil Çiçek, BDP's Sırrı Sakık and Hasip Kaplan met the evening before last. Yesterday, Çiçek paid a visit to President Abdullah Gül. During the 50 minute meeting, Çiçek departed the Presidential Palace with a direct order to solve the issue through 'cooperation.' Çiçek also received the message that the assembly is where all sides should seek a solution, "otherwise it does not leave a good impression." Çiçek then went on to meet with CHP leader Kemal Kılıçdaroğlu. Also following Çiçek's meeting with the president, MHP paid a surprise visit to both CHP and the AK Party. MHP members presented their own four-stage plan to CHP in regards to their refusal to take their oaths. At the same time, CHP leader Kılıçdaroğlu accompanied by his staff, went to the General headquarters for evaluations and then paid a visit to Cemil Çiçek.

'LET'S TURN A NEW PAGE'
After the highly anticipated meeting, Çiçek made an announcement in which he reiterated the stance that the Assembly is where the issue must be solved and stated, "I have invited CHP and BDP to reassess their decisions, to make a positive new start and to turn a new page." Çiçek went on to state: "It is the parliament's duty to eradicate these issues. The Parliament is the center where solutions are reached. We will solve these issues there. How the issue will be solved is dictated by the laws and the address is Turkey's Grand National Assembly."
Meanwhile, Prime Minister Erdoğan is expected to meet with Çiçek today at 14:00. The oath crisis is also expected to be handled at the celebratory summit, while Çiçek also relays the developments regarding his efforts in this matter.